And disaster recovery too, by painting a target on AWS

Speaking at the Sydney VMware User Group conference in Sydney today, Cormac Hogan, director and chief technologist of VMware’s Storage and Availability Business Unit, said “We are very focussed on building an ecosystem for VSAN.”

He added that such an ecosystem will have “features like data protection embedded in it, so you don’t need third party tooling to protect the workload.”

“VSAN in AWS gives us an opportunity to do DR,” he added. “Maybe failover to AWS. We are thinking about it. A sort of backup solution and a DR solution.”

In conversation with The Register Hogan later described the backup feature as snapshots.

Backup would also offer AWS as a target, the idea being that VSAN on-prem and in the cloud makes for a backup arrangement that should offer fast restores .

Adding such features will, Hogan added, help VMware to change perceptions of VSAN as best-suited to non-critical workloads.

“We were extremely cautious when we launched VSAN,” and therefore recommended it for simple workloads or test and development environments. Users therefore didn’t think VSAN was ready for prime time.

Hogan said the product has reached "feature parity” with rival hyper-converged and added “the mindset is changing” among customers.

Adding backup and DR will change things further, but Hogan said VMware will also continue to support data management software vendors and the APIs they rely on. 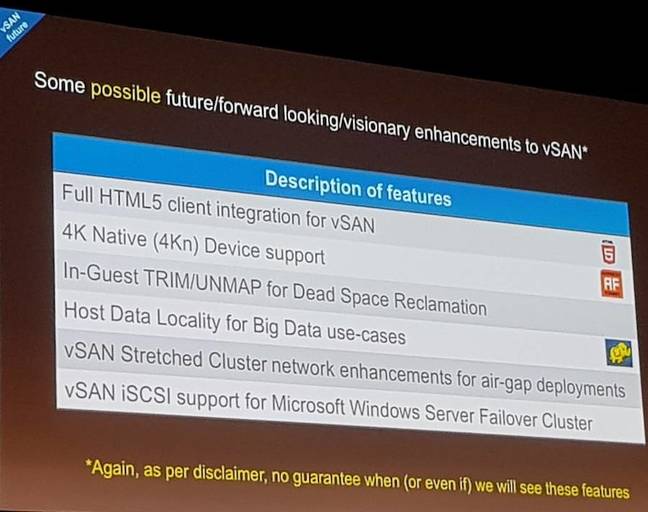 Stuff that may or may not make it into VSAN. Click image to enlarge