Seagate's HAMR to drop in 2020: Multi-actuator disk drives on the way

This was revealed at the Open Compute Project summit, which took place yesterday and today at the San Jose Convention Center. Wells Fargo analyst Aaron Rakers was there and distributed this Seagate presentation slide: 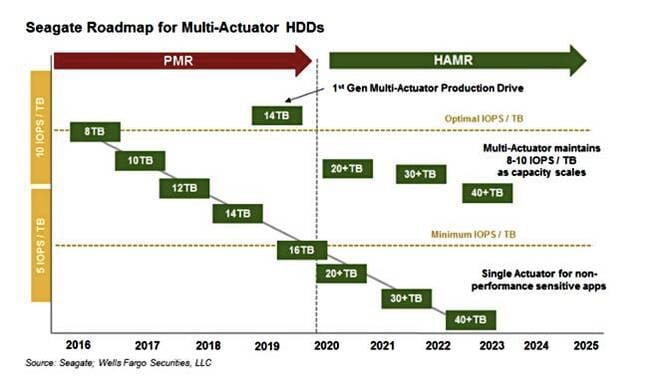 HAMR is a way of shrinking a disk drive's magnetised bits beyond the limits of current PMR (Perpendicular Magnetic Recording) tech, in which progressively smaller bits become unstable with error-prone bit values.

HAMR technology involves a more stable magnetic recording layer, needing transitory heating of a bit area so a bit value can be written to it.

The average number of IOPS per terabyte has been and is falling as disk capacity rises because there is a single read/write head assembly stack with one readwrite head/platter – a chokepoint. It will continue to fall as disk capacities rise further – see the lower line on the chart above.

Seagate is shown introducing a 14TB drive with multiple actuators in 2019, using a PMR technology drive. This will be a high-capacity drive with more performance than single actuator drives.

Seagate believes it can maintain a 10x $/GB gap between HDDs and SSDs through the leverage of next-generation technologies such as HAMR to drive to 2Tbpsi areal density (supporting 20TB HDDs) and ultimately 10Tbpsi (100TB HDDs), supporting a forecasted nine-year areal density CAGR of +30 per cent.

We can be fairly certain that both Western Digital and Toshiba have multi-actuator technology in their roadmaps. WD has its MAMR (Microwave-Assisted Magnetic Recording) technology to boost capacity beyond PMR limits and we await a Toshiba pronouncement on what it will do to go beyond PMR in order to keep increasing capacity along with its competitors. ®