Finding Robo: Just when you thought it was safe to go back into the water…

Researchers at MIT have developed a robotic fish that should allow scientists to spy on intimate fishy moments normally unseen by human eyes.

Fish, it has to be said, aren’t keen on humans and tend to hide when divers blunder too close with bulky underwater camera gear.

To keep things discreet, scientists have developed a robot that mimics the appearance and swimming behaviour of a fish.

The full research paper (PDF) has been published by one of the authors, Robert K Katzschmann.

SoFi (or RoboFish as The Register feels it should be called) is a 47cm long robot weighing in at 1.6kg. 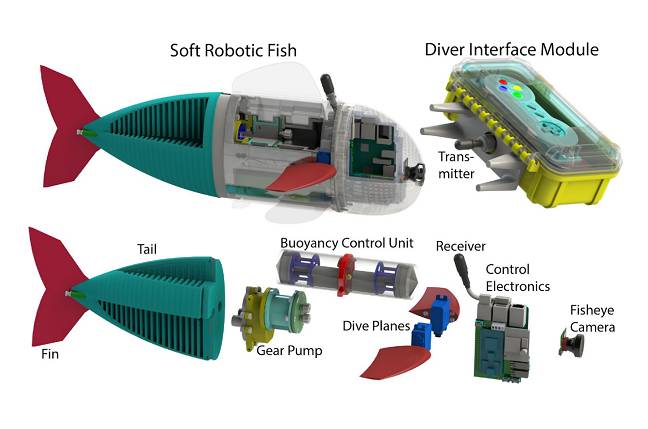 The rear of the robot consists of a soft, silicon rubber tail that contains a motor to mimic the undulating swimming motion of the real thing.

The front sports dive planes and a piston-powered buoyancy control unit to allow the mechanical mackerel to swim in three dimensions.

The head, which is filled with mineral oil to allow dives to 18m without springing a leak, contains electronics to receive commands and a single, unblinking fish-eye camera to monitor goings-on under the sea.

Since having a cable dangling behind SoFi would likely give target fish pause for thought, boffins used an acoustic modem, allowing active control from a distance of 5m (16.4ft ), or 10m (33ft) if the motors aren’t running.

The controller itself, rather wonderfully, looks like that of a Super Nintendo wired up to a Raspberry Pi in an enclosure disappointingly named the “Diver Interface Module”.

The diver can therefore hang back while SoFi conducts its undercover and underwater business.

Lucky researchers spent three days off the coast of Fiji putting SoFi through its paces, with the robot fish spending 240 minutes exploring coral reef environments while a diver looked on.

With SoFi being the first robotic fish to make the jump from the lab to the ocean and swim, untethered, for prolonged periods, researchers are looking forward to producing more robots, hoping to see a swarm of the things roaming the oceans of the Earth. ®

There's plenty of fish in... Oh

Boatnotes Warships don't only sink the nation's enemies, you know

PACK YOUR BAGS! Two Trappist-1 planets have watery oceans, most likely to be inhabitable

Inhabitable with alien lifeforms, mind you. Grab a phaser