Now, rather than actually debate and refine such legislation, lawmakers have decided to tack it onto the massive 2018 Omnibus Spending Bill [PDF] and seek to pass it by the backdoor.

The 2,232-page document covers $1.3tr in government spending from now until September and, if passed, we'll avoid a federal shutdown this weekend. Despite the fact the bill was only unveiled on Wednesday evening, the House of Representatives passed it on Thursday afternoon by 256-167 votes. Now, it's over to the Senate to approve before it gets the OK from President Trump.

Buried on page 2,201 of the bill is the Clarifying Lawful Overseas Use of Data Act (CLOUD Act), which was introduced to the Senate in February and hasn't really gone anywhere. The bill would allow American law enforcement to obtain their citizens' private data from servers anywhere in the world, provided they get a US judge to approve a subpoena. 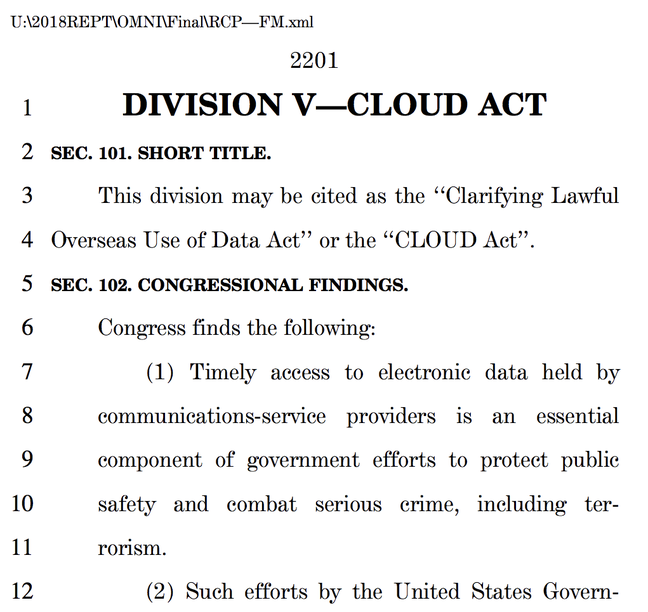 No silver lining ... The CLOUD Act literally tacked on at the end of the spending bill

This is a crucial point, because it allows the cops and Feds to go to a court on American soil and get permission to demand information stored on systems in another country. US prosecutors tried to do just that with Microsoft – getting a New York judge to approve a request for emails stored in Ireland – and it turned into an ugly legal battle. The CLOUD Act, whether passed as is or as part of the spending bill, seeks to avoid that nightmare in future.

The legislation will also empower the US government to set up bilateral agreements with other nations, giving them access to information on their own citizens that may reside within the US. All the overseas state has to do is to pinkie swear that it will use the information lawfully and respect human rights.

"Tucked away in the omnibus spending bill is a provision that allows Trump, and any future president, to share Americans' private emails and other information with countries he personally likes," said Senator Ron Wyden (D-OR) on Thursday.

"That means he can strike deals with Russia or Turkey with nearly zero congressional involvement and no oversight by US courts.

"This bill contains only toothless provisions on human rights that Trump's cronies can meet by merely checking a box. It is legislative malpractice that Congress, without a minute of Senate debate, is rushing through the CLOUD Act on this must-pass spending bill."

Wyden isn’t the only senator to have issues with the legislation. Rand Paul (R-KY) has used Senate procedural rules to hold up a vote on the spending bill on the grounds that no one has read it, so until he has gone through it page by page no vote will be held.

Well here it is, all 2,232 budget-busting pages. The House already started votes on it. The Senate is expected to soon. No one has read it. Congress is broken... pic.twitter.com/izvJlUEgUM

All eyes are now on the Senate to see if the bill, and with it the CLOUD Act, will pass. If the legislation gets the green light, it'll have done so with minimal oversight. Democracy! ®

The US Senate approved the spending bill, and cloud surveillance powers, leaving it to President Trump to sign. However, the Tweeter-in-Chief is threatening to veto the law.

Despite the tease, President Trump has signed off on the legislation, and the CLOUD Act is now the law of the land.