NAND chips are going to stay too pricey for flash to slit disk's throat...

For a while at least... spinning rust is going to stick around

The cost/TB of flash storage has been dropping for several years as chip capacity has increased through making smaller cells then layering cells with 3D NAND. It means you can get more chips from a NAND wafer and they cost less.

Flash is much faster to access than disk, but it is more expensive, meaning that performance-sensitive use cases have been moving from disk to flash, where the extra cost is justified.

What about higher-capacity, nearline drives?

Another leap in capacity is coming with QLC (4bits/cell) flash, offering a third more capacity per cell than current TLC (3bits/cell).

The effect of this, with flash being so much faster than disk, will be for fast-access nearline drive use cases to transition to flash too.

Disk drive capacity is also getting cheaper, as Seagate's drive roadmap shows, with capacities rising to 40TB+ in a few years time. 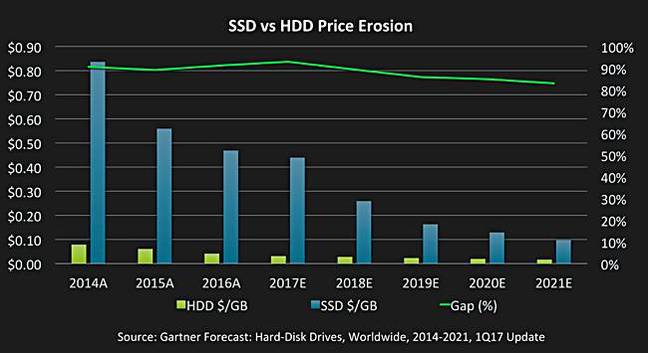 The green line shows the percentage difference (right-hand axis) between SSD and HDD $/GB prices. It is just above 90 per cent, meaning a 9X differential in 2014, moving to around 85 per cent in 2021.

What this indicates is that the SDD and HDD price erosion curves are moving in parallel, not coming together.

So long as the disk drive manufacturers can keep increasing capacity fast enough then they will retain a cost/GB advantage over SSDs. We can model this continued separation simply enough.

Here's a chart showing a 30 per cent annual price reduction in SSD and HDD prices, starting with a $1,000 SSD price and $100 disk price: 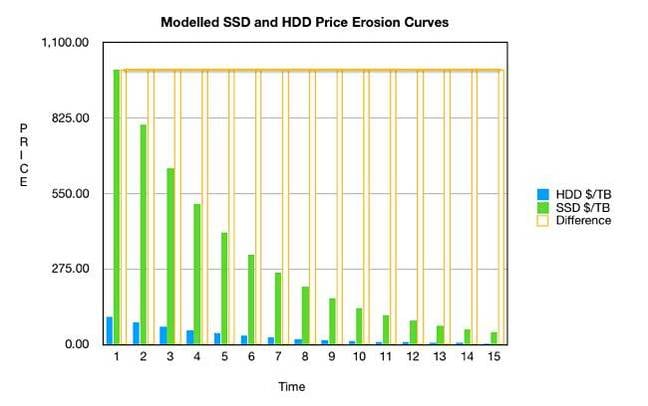 The difference columns are steady across the time periods. If we change the vertical axis to a log scale then these steady state parallel erosion curves become obvious: 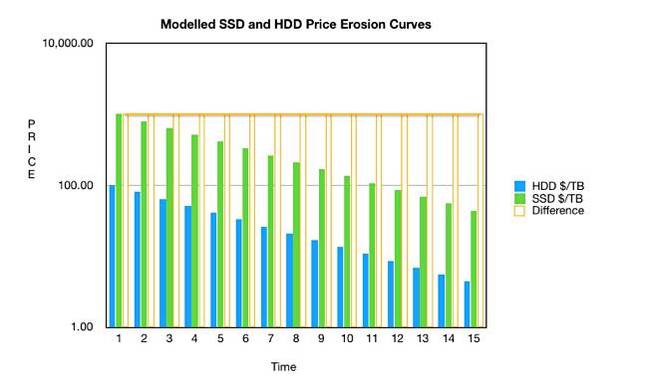 Why is Infinidat bothered?

It doesn't make all-flash arrays. All the main disk drive array suppliers are moving to all-flash arrays (AFAs) while Infinidat sticks with disk arrays leavened with a bit of secondary flash cache, relying for performance on primary DRAM caching. It claims a 90 per cent or more read hit rate from its DRAM cache.

So the AFA people say flash performance trumps disk. But Infinidat says DRAM cache-enhanced performance off disk is even better and a deal cheaper than AFAs.

OK, if its DRAM cache technology is so great then why aren't the AFA suppliers using it?

The Infinidat price/performance advantage comes into effect with high-capacity arrays, 1PB and upwards, which the AFA suppliers tend to ignore. And in this area, Infinidat says, it has an enduring advantage. That depends upon high-end arrays from Dell EMC (VMAX), IBM (DS8000) and Hitachi Vantara (USP) not developing their own DRAM caching technology.

If Infinidat makes any kind of dent in their sales enough then they will, and/or look at other performance boosters like storage-class memory and NVMe over Fabrics. Life in this business is just so much fun! ®