The spit bucket of idiotic tech ideas has just grown a little lighter with the death of "smart wine" company Kuvee.

Kuvee was selling an Internet of Things wine bottle, basically a bottle-shaped sleeve with a touchscreen on the front. Owners would buy special cartridges of wine that slide into the bottle, which then displays information about the brew on the screen. The whole thing cost $178 with four wine cartridges, but it's clear too few people were buying.

In an email to those that decided to splash out hundreds of dollars on a smart wine holder rather than, you know, wine, Kuvee's CEO Vijay Manwani warned that the company was looking for "a partner to acquire or leverage the Kuvée technology and bring it to market at part of their own business model, as soon as possible."

That means no more shipments of wine that were selected by Kuvee and poured into its special metal "cartridges". Although, if you do have its Wi-Fi enabled, smartscreen pouring bottle, you can buy the remaining stock at a 50 per cent discount – just use the promo code "LASTORDER."

That's right, the corked company didn't even have the sense to use the code LASTORDERS.

Incredible as it may seem, two years ago, this startup was seen as a potential glass raiser. It raised over $100,000 in an Indiegogo campaign and, combined with press attention in high-profile magpie magazines including Vogue and Wired, it received an improbable $6m investment from VCs General Catalyst and Founder Collective.

The company however is the epitome of a failed tech startup: its concept and business model only making sense to a buzzed techie with more disposable income than sense.

In his farewell email, Manwani remained baffled by the failure of his company. Rather than recognize the obviously flawed premise behind it, he waved his finger at the recent Napa fires for having "affected our ability to scale our customer base over the holiday season and hence our ability to raise the funds required to continue building awareness of Kuvée."

A clue to why Manwani thinks Kuvee was a good idea comes in the first paragraph when he states, matter-of-factly: "Wine is meant to be enjoyed by the glass (not by the bottle)."

A sentiment that pretty much anyone in the wine trade or in fact anyone who enjoys drinking wine will find unusual. And by 'unusual' we mean 'extravagantly wrong.'

Kuvee tries to solve a problem that only its founder and presumably a few hundred other people have: how to only drink a glass of wine at a time. Everyone else has friends and family to share with.

Not only that but Kuvee was removing people's ability to select their own wine: the company was in charge over which wines were decanted into its special cartridges and you had to wait for them to be delivered to your house. Sort of like a wine club but with unnecessary extra decanting and control and a massive upfront fee.

Once opened, Kuvee was proud of the fact that its cartridges would keep wine fresh for up to 30 days. The broad idea was that you would subscribe to receive a batch of four cartridges a month and then swap out the cartridges depending on what wine you fancied at any particular time.

Maybe that approach describes you perfectly. Maybe you're sick of having to finish that bottle of Pinot before you feel you can open the Zinfandel. Maybe you live by yourself and only want to drink one glass of wine every two days.

Maybe you have an aversion to only spending $15 on a wine keeper when you can spend $350 on a smart pourer with a screen and four cartridges of wine someone else has chosen for you (by the way, you can actually buy a professional wine keeping kit for $150 that will make your wine last much longer than 30 days).

But for everyone else in the world it is an absolutely terrible idea.

The supposed benefit of paying up front for a Wi-Fi pourer and constraining yourself to someone else's cartridges, is that the company includes details about the wine, including food pairings, which you can read on the screen. You can even use that screen to order more wine - if you connect it to your home wireless and remembered to plug it in so the battery isn't dead.

Aside from the fact the company was solving a problem few people have, here's why it didn't work as a business idea:

Wine clubs work by buying wine in bulk straight from the wine industry and then packaging bottles together to send them to members. In this way, the company can get pretty good wine at a really good price, include the cost of packaging and posting, and still make a small profit while providing wine to customers at a cost lower than if they buy it in a shop.

It is a very tight margin business though which is why the most common wine clubs are those that wineries run themselves – because they get to ship their own product and do much of the work of packing and shipping already.

In theory, everyone wins, especially if you're the kind of person that likes not having to choose their own wine. Typically a wine club will also write up some notes on the wine itself and include them on a piece of paper with the shipment. 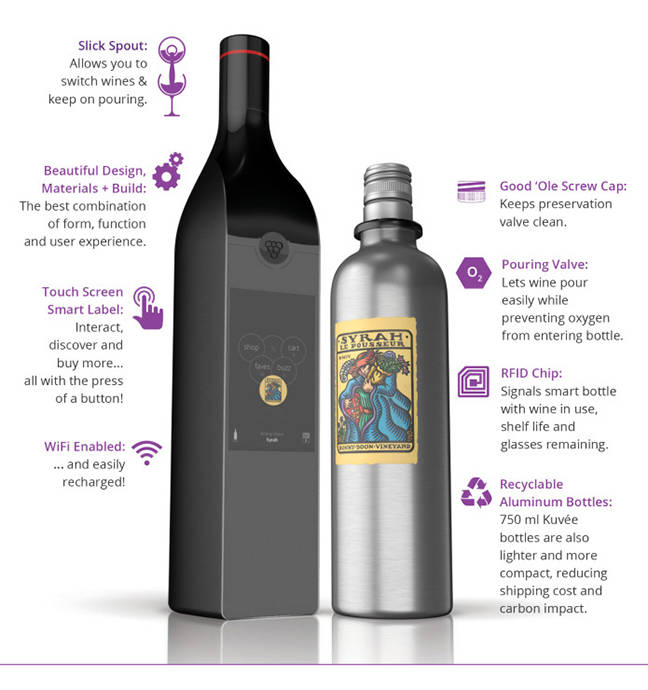 The future of wine? Or a ridiculous idea? You decide (actually you don't have to - the answer was ridiculous)

Kuvee takes this model and makes it much, much more labor intensive and expensive. The company has to:

The upshot to this, of course, is exactly the same as the numerous food delivery services that wasted millions of dollars inserting themselves into a market where they weren't needed: the customer ends up paying more than if they did it themselves, and it ends up costing the company money to provide the over-priced and unnecessary service.

As for the special container idea where you manage to lock people in using only your product, like Keurig coffee pods: that only works if it is at least a two-step process to get at the product yourself. As Juicero realized, you can go buy juice at any supermarket and pour it out. You don't need to pay someone else to help you. You know what supermarkets also sell? Wine.

It should have been obvious that in a market where there is already a massive infrastructure and a hugely diverse number of suppliers (wineries) as well as outlets (shops), there is no money to be made in the middle. And literally no one but a fad-driven fool wants a wine pourer with a touchscreen.

And so alcohol has again proven to be an unreliable source of inspiration. Nonetheless, we love nothing more than watching someone charge wildly at a brick wall convinced they can hurl themselves over it. So let's raise a glass to Kuvee and toast: to tech idiocy! ®