All in all it's just another brick in the patent wall

The Shenzhen Intermediate court has upheld an injunction against Samsung sought by Huawei in an intellectual property dispute.

Huawei had originally dinged Samsung for patent infringement, but the Korean giant successfully argued that the IP was a Standard Essential Patent (SEP), and the dispute should therefore be resolved through FRAND ("Fair, Reasonable and Non-Discriminatory") licensing procedures. This is a formal legal arbitration process that sets a fair royalty valuation for the IP.

In this, Huawei has prevailed. The court noted last week (in a hefty 350-page decision, summarised here by law firm Bird & Bird) that Samsung hadn't behaved reasonably when Huawei asked for a royalty, and weighed up the strength of other evidence. The court also acknowledged that more Huawei IP had been upheld by Chinese courts than Samsung IP.

Richard Vary of Bird & Bird called it "a detailed and reasonable decision". It's a sign of how rapidly the Chinese market is maturing.

Firstly, Chinese companies no longer simply copy, but increasingly develop their own IP. Yes, Huawei was smacked for industrial espionage in the case of T-Mobile's Tappy Robot last year, but increasingly Chinese manufacturers realise they have to play by global IP rules. Notorious copycat Xiaomi has been signing a number of licensing deals it hopes will allow it to enter Western markets, if not an increasingly Sinophobic USA.

Huawei proudly displays its "patent wall" at its Shenzhen Visitor Centre. Here's what it looked like in 2014: 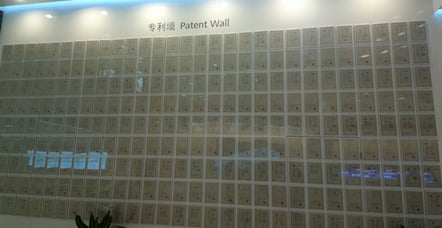 There's still the tricky situation of how well Western companies can protect their IP once they've entered into partnerships with Chinese companies – which is how you must do business in the Middle Kingdom.

IPKat has a nice account of the court's decision here, and Sir Robin Jacob's analysis of FRAND (PDF) could also be useful for getting your head around an important and emerging area. ®