ViperCard takes a bite out of old-style programming

Video Apple fans with a bent for nostalgia have some to wallow in after a HyperCard clone debuted on Monday.

The brainchild of one Ben Fisher, ViperCard made itself known with this Tweet:

The ViperCard Website will bring pangs to anybody who remembers HyperCard from the late 1980s: 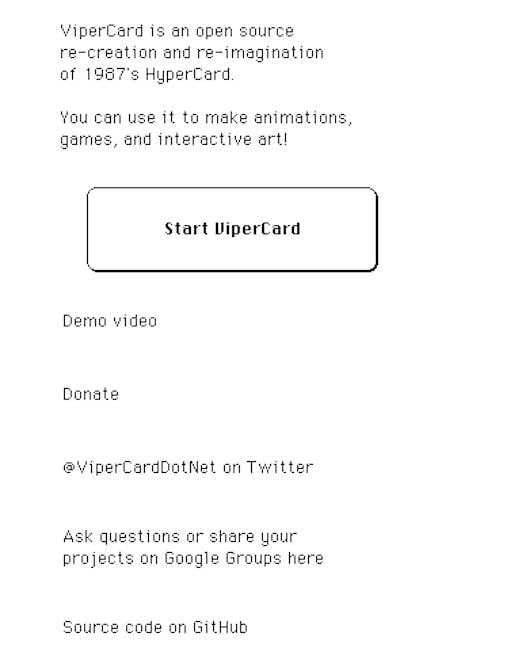 HyperCard was created after Apple decided it wanted a “programming for non-programmers” environment, and in 1987, HyperCard arrived with a price point of US$49.95. It featured database capabilities, a graphical UI users could modify, and the HyperTalk programming language that let users create something not a million miles away from a static HTML website, only on the desktop. Hyperlinks were moderately-brain bending stuff in 1987, and HyperCard became a success on Mac Classic environments. The product made it to Version 3.0 before Steve Jobs abandoned it, and end-of-sale arrived in 2004.

One eye teared up by HyperCard's return belonged to Clay Shirky:

Fisher explained that “HyperCard was successful because it removed many obstacles in the way of people creating digital or interactive media”, something he reckons is missing from modern programming.

“Our lives (social, career, entertainment) center around software -- but we are discouraged from learning how this software truly works. It is stressful at a deep level, for nearly all of us, and especially the elderly. We are made into inadequate, passive consumers, when software has the potential to be so much more.”

Fisher built ViperCard as a JavaScript Web app, and hopes it can behave itself even on low-quality connections. By way of demonstration, Fisher's ported John Calhoun's Glider 4.0 to ViperCard here. ®