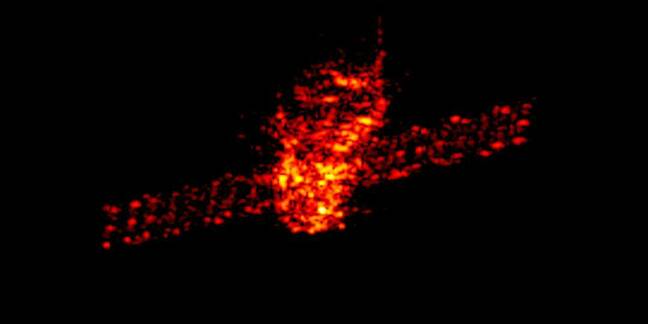 China's first space station flamed out in the atmosphere and any remaining fragments have now been consigned to a watery grave in the South Pacific.

The Tiangong-1, which translates to Heavenly Palace, has been tumbling out of control in low-Earth orbit for over a year after an unspecified fault crippled it in 2016. US military radars at the Joint Force Space Component Command (JFSCC) tracked the object and confirmed reentry on April 1 – no joke.

What's Chinese and crashing in flames? No, not its economy – its crocked space station

"The JFSCC works alongside government, industry and international partners to track and report reentries, to include today's Tiangong-1 reentry, because the space domain is vital to our shared international security interests," said Major General Stephen Whiting, deputy commander of JFSCC.

"All nations benefit from a safe, stable, sustainable, and secure space domain. We're sharing information with space-faring nations to preserve the space domain for the future of mankind."

Chinese state media is reporting that the majority of the spacecraft burnt up and it slammed into the atmosphere at high speed, but that chunks of the 10.4m (34.1ft) by 3.4m (11ft) space station made it down to the surface of the planet. The impact zone was relatively close to Point Nemo, a spot in the Pacific used to dump deorbited spacecraft.

NW of Tahiti - it managed to miss the 'spacecraft graveyard' which is further south! pic.twitter.com/Sj4e42O7Dc

Point Nemo is used for dumping because it's the furthest point on the planet from land, with the nearest shoreline 2,415km (1,501 miles) away. The remains of the Mir space station and plenty of International Space Station supply spacecraft now reside in its watery depths and it's thought as many as 100 former spacecraft and satellites have splashed down in the area.

Tiangong-1 was lofted on September 29, 2011, and had a projected two-year lifespan. The space station was small but allowed the Chinese to practice docking maneuvers and collect data on the health of the astronauts who visited it.

A new, much larger space station in planned to begin construction by 2022 and the Chinese government has made it clear that it sees space as a huge opportunity for the future. ®