The inexplicably expensive HTC Vive Pro has arrived, and rather than spend a few hours in virtual world of rainbows and unicorns, the team at iFixit have taken the headset into the very real world of their workshop and taken the thing apart. 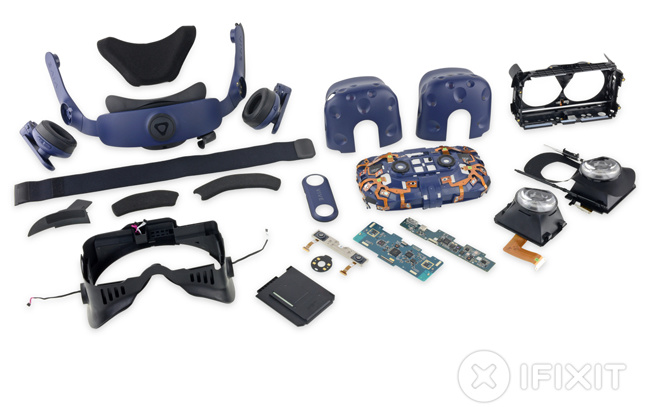 With a resolution bump to 1440 x 1600 per eye making for a combined resolution of 2880 x 1600 with a 90 Hz refresh rate, HTC trumpeted the arrival of the latest iteration of their virtual reality headgear at CES 2018 as a step forward in terms of display quality.

The handful of Windows Mixed Reality users were quick to point out the Samsung Odyssey sported an identical resolution in 2017, but were drowned out in the excitement surrounding HTC’s emission.

The iFixit team were pleased to find the improved headphones held on with just Phillips-head screws and spring contacts, and a single cable doing duty for power and data. The wire-free experience promised by HTC has yet to ship.

Further tinkering with a pick and a Phillips-head screwdriver sees the outer shell of the Pro removed, exposing 32 photodiodes for spotting infra-red (IR) beams from HTC’s Lighthouse base stations.

Moving deeper into the Pro, and the team came across the twin microphones, which promise better audio pick-up during VR immersion, before removing the mainboard to find two cameras supporting HTC’s Chaperone feature and some hand-tracking.

Moving past the headset and into the display itself sees a board sporting an Analogix 4K receiver, a DAC from Cirrus Logic and Cmedia USB 2.0 audio chip.

The underside of the board features more Cirrus Logic silicon providing the Hi-Fi Audio Codec, another Lattice FPGA, USB 3.0 controllers from Via and 4 Mb and 8 Mb CMOS flash chips from Macronix. A further 4 MB of flash memory is present, courtesy of another Winbond chip.

The main event, from a user perspective, are the displays themselves and while the iFixit team found the lenses were likely unchanged from the previous versions, the Samsung AMOLED AMS350MU04 panels are apparently identical to those used in the Odyssey Headset.

Overall, the iFixit team were impressed with the HTC Vive Pro, awarding it 8 out of 10 for repairability thanks to modular design and standard screws holding most of it together.

It would still be a complex repair, so VR users might want to try not walking into a non-virtual wall and avoid having to fix the thing altogether. ®