Audio is a mixed bag. Samsung said it made a considerable effort redesigning the internal layout of the phone to accommodate the stereo speakers setup. The bottom-firing speaker is supposed to be 40 per cent louder than on the S8, complemented by a tweeter in the top bezel. The Galaxy S9 now comes close to the astonishing audio playback Apple achieved in the smaller and slimmer iPhone 7 and 8 produce, with good separation but inferior bass. Audio trickery from Dolby Atmos certainly helps.

Europeans get a Cirrus Logic CS43131 DAC for the audio - details here - US variants of the S9 use a Qualcomm SoC rather than Samsung's own SoC, and so use the Qualcomm WCD9341 audio chip instead.

Both Samsung and Apple have some work to do satisfy audiophiles with the quality that LG can offer. 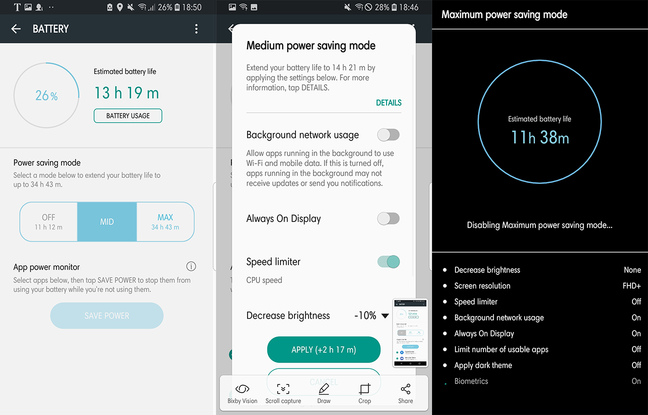 So how does battery life hold up? The power pack is very much the same as last year's. It's adequate without being a champ. Samsung is evidently keenly aware of this, as it scales back the maximum resolution of the display. The power profiles offer further savings, and there's a featurephone mode for emergencies.

Although Samsung has been knocked for giving the Galaxy S a "cosmetic" overhaul, for me, that's no bad thing. By choosing the S9 you're undoubtedly paying a premium. Rivals charge similar prices but don't fall short, nor do they pack in all the features. Google's Pixel edges it in some situations but lacks the elegant design or wireless charging, for example. So like Rocky returning to the ring one more time, Samsung deserves the accolade of making the best Android phone you can buy. ®