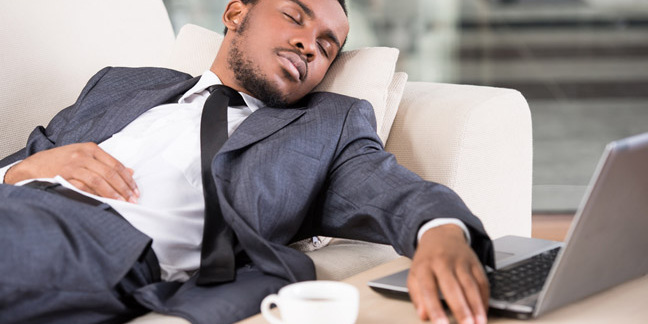 Dozy ride-share drivers juggling multiple jobs are putting people's lives at risk, according to a statement from the American Academy of Sleep Medicine (AASM) in the Journal of The Bleeding Obvious Clinical Sleep Medicine.

While Uber’s self-driving cars have taken a bit of a bashing, in recent weeks the AASM’s department of stating the blindingly obvious has pointed out that human hands on the wheel are all very well, unless those hands are attached to a drowsy driver.

The AASM’s particular concern is the "independent contractor" nature of ride-sharing drivers, many of whom are ferrying passengers around as a secondary job.

This ‘second job’ nature of the work undermines safety measures put in place by operators. As an example, Uber’s driver app automatically goes offline for six hours after 12 hours of driving time has been hit. Lyft insists on a six hour break after 14 hours.

Why it should be ok for a Lyft driver to spend an additional two hours behind the wheel is not clear.

While ridesharing companies doubtless hope that drivers will take those six hours to get some rest, the ASSM fear that the model of a driver having a ‘primary job’ means that some will fail to get enough sleep, resulting in an increased chance of a crash.

The statistics make for grim reading, with drowsy driving deaths standing at 803 in 2016 according to the US Department of Transportation’s National Highway Traffic Safety Administration (NHTSA.)

The ASSM think this may be the tip of the iceberg, citing a survey from the American Automobile Association (AAA) that claimed that ten per cent of the 57,732,000 crashes on U.S. highways from 2006 to 2015 involved a drowsy driver (PDF). The ASSM conclude by urging public and private stakeholders to get together to come up with a solution to the problem of drowsy driving.

One approach could be to adopt EU-style regulations, where drivers of goods vehicles have a weekly limit of 56 hours, a daily limit of nine hours, and a maximum of four and half hours between breaks. However this doesn’t deal with the primary versus secondary job problem.

Another approach would be to replace the drivers with self-driving cars. That day is still quite some way in the future, based on current technology. ®