OK, this time it's for real: The last available IPv4 address block has gone

Now for the last time, will you all please shift to IPv6?!

You may have heard this one before, but we have now really run out of public IPv4 address blocks.

The Internet Assigned Numbers Authority – the global overseers of network addresses – said it had run out of new addresses to dish out to regional internet registries (RIRs) in 2011. One of those RIRs, the Asia-Pacific Network Information Centre, said it was out of available IPv4 addresses later that year.

Then Europe's RIR, Réseaux IP Européens aka RIPE, ran dry in September 2012, followed by the Latin America and Caribbean Network Information Centre (LACNIC) in June 2014. Next, the American Registry for Internet Numbers hit an IPv4 drought in September 2015.

Of course, there was running out and then there was actually running out. It wasn't until February 2017 that LACNIC moved to "phase 3" when only those companies that did not have any IPv4 space were allowed to get any of the remaining addresses – which will only come in /22 bite-size pieces.

But this week, we have really run out. Despite having run out six years ago, RIPE this week has really, really run out. It has allocated its last /8 block – and you can see from this pretty graph – the dark green has run into the ground. 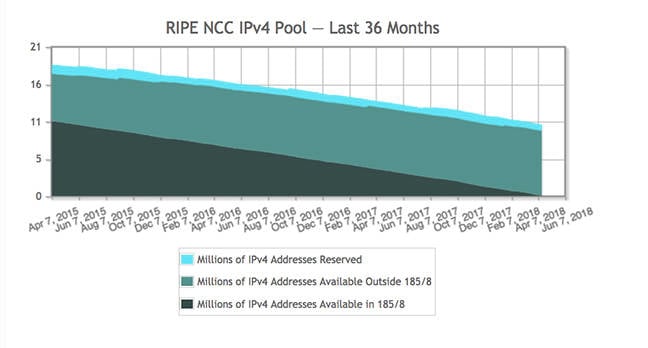 Following that dark green line all the way... into nothingness

Of course, RIPE still has some other addresses. But it's not like the old days when people would scoff at anything smaller than a /8. From here on out, it's just crumbs.

And, of course, people can still buy, sell, and exchange their IP addresses. It's just that we're pretty much out of fresh public-facing IPv4 allocations at this point.

But it's gonna be OK

The good news is that after 20 years of pleading by internet engineers, who are not at all embarrassed by the fact that they developed a new protocol that is incompatible with the old one, everyone has decided to move over to IPv6 and so it doesn't matter that we have run out of IPv4.

Only kidding. It's an absolute mess.

The World IPv6 Launch campaign is still determinedly following and promoting the seemingly endless efforts to get people to move to IPv6: just this week it announced "an exciting new entrant" to its measurement stats. Chunghwa Telecom is the Taiwan's largest telco and has an incredible IPv6 deployment rate of... 21 per cent.

But there's another measure for people to get excited about: the number of the top 1,000 websites that are available over IPv6.

That has now rocketed to, er, 26.3 per cent. That's a whole percentage point up from six months ago. Which means that all the biggest websites in the world should be IPv6 ready by May 2021.

Despite the objective reality that a move to IPv6 is going to be necessary and it will be increasingly painful not to do so, it appears that human beings are pretty poor at behaving rationally and seem to be waiting it out until they literally have no other option.

ISPs are in denial; governments are looking for the IPv4 dollar signs; and criminals are cashing in.

But with the last IPv4 address block now really, really gone, it's only a matter of… what's that? AFRINIC has still got some? Let's go. ®