Oh no, wait, that is the news. Except the cheap part 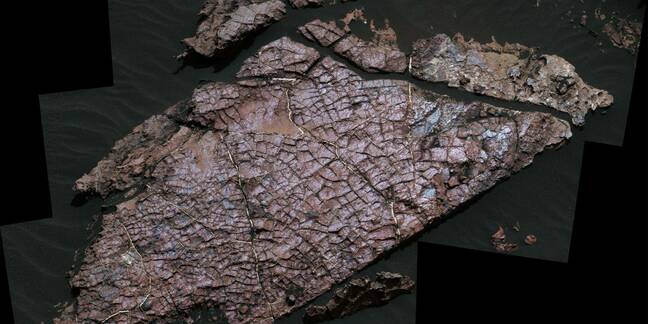 Pic Water that once flowed across the surface of Mars caused the formation of mud cracks that were spotted by NASA's Curiosity rover, scientists have confirmed.

The fractures were discovered in 2017 while the nuclear-powered robot was busy snapping away pictures of the Gale Crater – an area believed to be a 3.5-billion-year-old lake bed that stretches about 154 kilometers (96 miles) across and is now dried up.

The machine was told to focus its attention on a coffee-table-size rock dubbed Old Soaker. The images showed the formation was riddled with lines and marks experts now insist are cracks in the ancient dried-up mud coating the slab.

“We are now confident that these are mud cracks," Nathaniel Stein, lead author of a study into the photographs, and a geologist at the California Institute of Technology, said on Thursday.

The cracks formed when moisture evaporated into the atmosphere from the planet's wet sediment, as you'd expect. A paper detailing the pictures of Old Soaker was published in the journal Geology earlier this week.

'Water on Mars' re-classified as just 'sand on Mars'

The concentration of mud cracks, particularly in the center of the crater, are useful for working out how the water levels in the ancient lake changed over time. "The mud cracks show that the lakes in Gale Crater had gone through the same type of cycles that we see on Earth," said Stein.

The images were taken by Curiosity's Mastcam, a stereoscopic imaging instrument that works over a range wavelengths, and the Mars Hand Lens Imager, another one of the 17 cameras aboard rover. The researchers also analyzed the cracks and the shapes in the rock, as well as its chemical contents, using the ChemCam Laser Induced Breakdown Spectrometer and the Alpha-Particle X-Ray Spectrometer.

“The mud cracks are exciting because they add context to our understanding of this ancient lacustrine system. We are capturing a moment in time," Stein said. "This research is just a chapter in a story that Curiosity has been building since the beginning of its mission." ®

Briny liquid may be more common on Mars than once thought, unlikely to support life as we know it

Jeez, no need to be so salty

Diggerland comes to Mars as boffins battle to save InSight's mole

Robot arm to give stricken burrower a helping scoop

Let's grab a nice cold drink on the Red Planet. Don't forget to pack a shovel