Consumer champion Martin Lewis, Britain’s Money Saving Expert, has declared he is suing Facebook for defamation over fake adverts featuring his face that repeatedly appear on the under-fire social network.

In a statement issued last night on the MoneySavingExpert website, of which he is editor-in-chief, Lewis said he was sick of plastic promos that use his reputation as a champion for the little guy to lure people into Bitcoin-based scams.

"Within the last year, the social media site has published over 50 fake Martin Lewis adverts which are regularly seen, likely by millions of people, in the UK," complained Lewis. "The most prevalent are get-rich-quick schemes currently titled 'Bitcoin code' or 'Cloud Trader', which are fronts for binary trading firms based outside the EU."

Rival consumer campaign website Which? has said "in most cases [binary trading schemes] are quite simply a fraud," explaining: "When you trade binary options, you're placing a bet on whether the price of a share, stock market or other asset will be above or below a set price in future." The binary part is because there are two outcomes: you win, normally scooping a hefty premium, or you lose your entire bet.

Which? says "binary options" trading firms operate like bookmakers, so your losses are their gains – unlike real trading, where the broker passes on both losses and gains to third parties (i.e. taking a percentage as commission rather than keeping the lot). 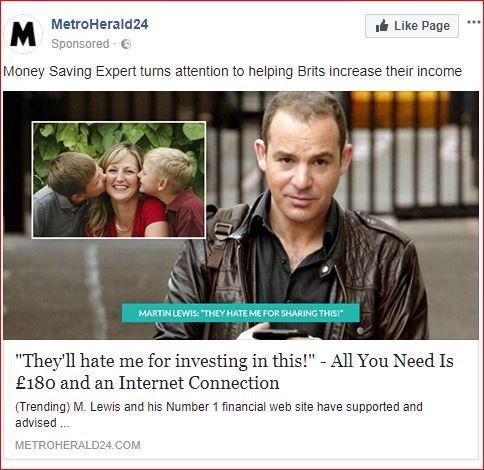 Lewis was unequivocal about the fake ads: "I don't do adverts. I've told Facebook that. Any ad with my picture or name in is without my permission. I've asked it not to publish them, or at least to check their legitimacy with me before publishing. This shouldn't be difficult – after all, it's a leader in face and text recognition. Yet it simply continues to repeatedly publish these adverts and then relies on me to report them, once the damage has been done."

It's time Facebook was made to take responsibility. It claims to be a platform not a publisher – yet this isn't just a post on a web forum, it is being paid to publish, promulgate and promote what are often fraudulent enterprises. My hope is this lawsuit will force it to change its system. Nothing else has worked. People need protection. – Martin Lewis, MoneySavingExpert

Responding to the threatened sueball, Facebook said in a statement: "We do not allow adverts which are misleading or false on Facebook and have explained to Martin Lewis that he should report any adverts that infringe his rights and they will be removed. We are in direct contact with his team, offering to help and promptly investigating their requests, and only last week confirmed that several adverts and accounts that violated our advertising policies had been taken down."

If the case goes to trial and Lewis wins, it will be a historic blow for Facebook. The free content ad network has built its business on the basis that it is not liable for what others post on its website, including users and advertisers. A lawsuit proving otherwise would sound the death knell for Facebook in its current form.

The British government has spent the last year or two coming up with ever-more-Orwellian fantasies of how to control the content of social media websites, though with no anti-speech laws coming their way soon, the US-based firms have all ignored the UK's ministers – presumably in the hope they'll either calm down or get voted out and replaced with others more amenable to the Silicon Valley point of view. ®