We wanted a camera, they gave us the eye of Gemini – and an eSIM

The plucky little PDA that could is getting some upgrades.

El Reg popped into Planet Computing's London office to get cosy with some of the new Gemini toys due to launch in the not-too-distant future.

I spent some time earlier this month in the company of the Psion-inspired Gemini and came away impressed, but had a few complaints.

The lack of a rear-facing camera was my biggest annoyance, and the keyboard and hinge also took some flak. Some of those issues look like they'll be addressed.

Beginning with the rear-facing camera, Gemini owners will be delighted to learn that assembly of the components is under way. 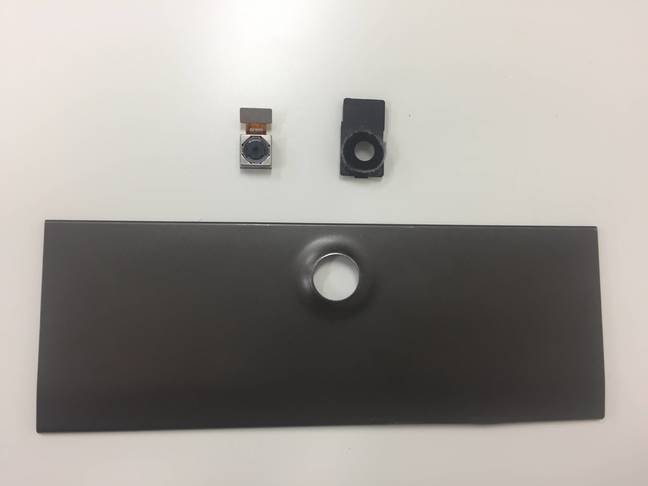 Happy snapping with the eye of Gemini

The camera is easily slotted into a port behind the screen, as promised, and a new backplate clips into place.

Fitting the camera means the back of the Gemini is no longer smooth, which is a shame, but with a slightly protruding lens a common feature on mobile devices these days, it would be churlish to complain too much.

After a reboot, the camera was fully usable in Gemini's lightly skinned Android OS.

You won't be using this camera to take award-winning vistas. At 5MP, nothing in the way of high-end optics and no flash, this snapper is good for the odd shot of a receipt or similar.

Planet Computing also plans to enable the eSIM module built into recent 4G Geminis (and a feature of the next batch of PDAs due in May).

Claiming that the Gemini will be the first European mobile phone with eSIM, Planet reckons that up to six eSIM profiles can be configured along with the existing physical SIM, depending on carrier.

Apple fanbois will likely point at the Watch 3 as another European eSIM contender, although the implementation is not as flexible – the Gemini does not require a shared number.

The party trick of the Gemini is, of course, the keyboard.

Planet continues to fiddle with the design, and the latest attempt to address user feedback is a revision to the mat that sits beneath the keys and the material from which it is made.

In use, there is a definite improvement. However, it is very slight and my earlier remarks about the keyboard still stand. There remains an adjustment process that needs to be gone though, which may be off-putting for users.

Linux fans will be glad to know that Gemini's 4G capabilities will be coming to the version of Debian currently available for the device, with a community effort led by Nikita Ukhrenkov and Adam Boardman bringing calls and messaging to the OS.

Anyone who has used the Gemini's Linux capabilities will also be relieved to learn that the keyboard is now mapped correctly and that the team expects the HDMI output to also be supported.

The Sailfish OS also looks impressive, feeling slick and smooth during my time playing with it. The setup process was a little jarring, showing its mobile phone roots by initially expecting a portrait screen, but with a few months to go before either it or the Debian improvements land, some rough edges are forgivable.

Planet CEO Dr Janko Mrsic-Flogel was particularly excited about the upcoming Gemini Agenda app, with which I had a little play.

The app, which will be familiar to users who miss their old Psions, is visually impressive and represents the first integration with the user-configurable LED profiles.

Other updates over the summer will bring the promised "Data" contacts and data management system, which is slightly behind the Agenda development and is, again, another hold-over from the original Psion.

Perhaps more importantly, an update to the next version of the Android OS is also due this year.

Adding the £39 camera accessory certainly addresses one of my biggest gripes. I am surprised it is not a standard component, although Planet argues that half of backers did not want it, preferring a smooth, featureless back.

The looseness of the hinge remains a problem for me, and this is not something Planet is likely to address. The keyboard, while marginally improved, still takes getting used to.

However, the upcoming software improvements make a compelling case for the Gemini as a PDA and the Linux updates give a better all-round experience.

The enabling of the eSIM functionality over the coming months also makes the 4G version an intriguing proposition.

Once these enhancements are released, we'll revisit the Gemini once more for a updated review.

While £599 (for the 4G version) could buy you a relatively good laptop or Android smartphone, there continues to be nothing quite like the Gemini. ®

Exclusive And the Archangel appeared and said: 'Pssst, someone's making a new Psion'

The Gemini pocket PC is shipping and we've got one. This is what it's like

Exclusive Hands on with the Linux-powered reborn Psion