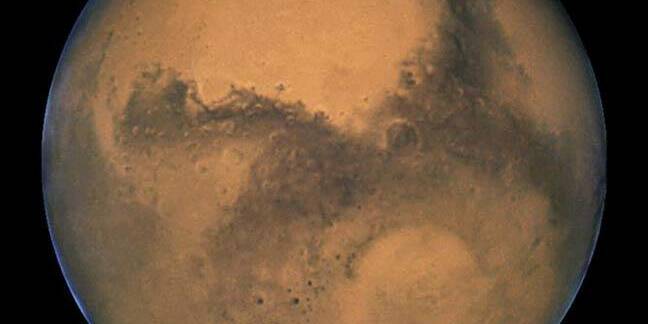 There was good news and bad news for interplanetary exploration today.

The bad news is that the heat shield for NASA’s Mars 2020 rover has cracked. Thankfully, it hasn't even taken off let alone attempted to land on Earth's sister world.

The good news is that NASA and the European Space Agency (ESA) have signed an agreement that may see some Martian dirt shipped back to Earth.

Word of the knackered shield came following an inspection of the composite structure after a week of rigorous testing. The results were that, er, it broke.

The team at NASA’s Jet Propulsion Laboratory reckons there is enough time in the schedule to make another one before the spacecraft heads off to the Red Planet. Scientists are likely heaving a sigh of relief that the damage happened during a test on Earth rather than when screaming into the Martian atmosphere.

NASA’s Mars 2020 mission builds on what the agency refers to as “heritage” hardware. In other words, about 85 per cent of the rover is based on gear already built or designed for the Mars Science Laboratory (MSL) aka Curiosity, which is trundling over the unforgiving dust world's surface.

As Jim Watzin, director of NASA’s Mars Exploration Program, put it: “The fact that so much of the hardware has already been designed – or even already exists – is a major advantage for this mission. It saves us money, time and most of all, reduces risk.”

The heat shield was one of two built for the MSL and first tested in 2008. The most recent test, earlier this month at the Lockheed Martin Space Facility, subjected the shield to 20 per cent higher stresses than those expected on entry into the Martian atmosphere. And it broke. Scientists will take a close look at the fracture and ponder if a redesign is needed. The mission is due to launch in July or August 2020, when the positions of Earth and Mars in the Solar System will make for a more efficient trip.

Bring me back some dirt

Not withstanding NASA’s heat shield crack – after all, the European Space Agency learned a lot from its own Martian reentry experience with the Schiaparelli lander – NASA and ESA signed a pact today to bring some Martian soil back to Earth.

ESA’s own ExoMars rover is set to join NASA’s robotic geologists in 2021, and will be armed with a drill to retrieve samples from up to two metres below the surface. Now eggheads at both space agencies will together try to figure out how to get those rocks back to our home world.

ESA’s David Parker, director of human and robotic exploration, said: “The challenges of going to Mars and back demand that they are addressed by an international and commercial partnership – the best of the best.”

The agreement was signed at the ILA Berlin airshow with Thomas Zurbuchen, NASA’s associate administrator for the science mission directorate.

Scientists hoping to get some real Martian muck under their microscopes should not hold their breath. While ESA has demonstrated that its Martian infrastructure will work with NASA’s, by relaying data from Curiosity back to Earth via the ExoMars orbiter, the result of studies into potential sample return cooperation are not due until 2019. Any potential mission involving posting materials back to Earth would therefore be some distance into the future, beyond the 2020 and 2021 robo-excursions. ®