Analysis Cloud startup RStor has dropped out of stealth and received $45m of A-round cash, led by Cisco Ventures, to develop its Multicloud Platform compute service.

Currently organisations with large data sets that require high-powered processing ship them to public clouds, make deals with supercomputing centres or get their own HPC processing and storage gear. Whichever choice they make involves a degree of lock-in. 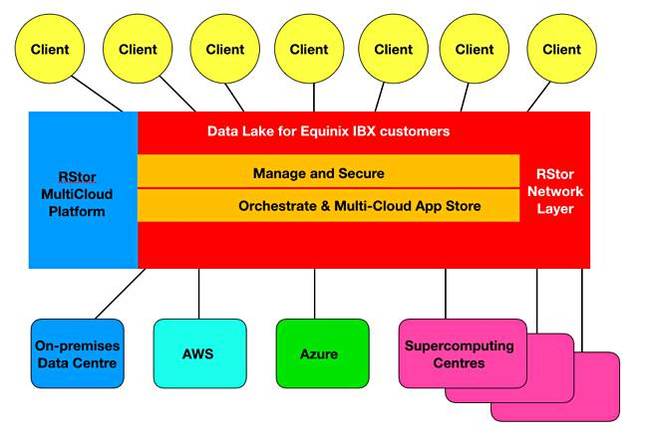 Our take on the RStor concept

RStor told us its goal is to convert any x86, GPU, Power PC, Arm and Cray processor into a cloud node. Azure and AWS bring x86 compute into play.

Customers hook up with RStor's Multicloud Platform to get a look at the available computing resources and select one.

Their compute selection can be guided by an orchestration facility based on RStor machine learning and analytics. The analytics, according to the firm, "characterise the cost and performance attributes of each cloud provider and deployment platform to provide guided selection and automated workload placement based on customer-specified governance criteria".

RStor claims its software can automate and match workloads with the right computing resources between on-premises, public cloud, and supercomputing centres. This seems like cloud compute broking.

"This allows users to create a virtual data centre across available computing resources on-prem, off-prem and in the cloud, and includes intelligent resource selection optimised for specific computing jobs."

There is also a Data Lake facility, a storage service located at the edge of the cloud, which it says "enables organisations to make their data securely accessible to on-premises IT, public clouds and supercomputing centres".

It claimed to have "launched the first multicloud App Store with popular open source applications that any Singularity or Docker container can use, including TensorFlow, VASP, OpenFOAM, and dozens of others".

The containers can run in different compute environments and RStor "aggregates containers into a hyper-distributed infrastructure".

Taufik Ma, CEO of Attala Systems, which is involved with composable cloud infrastructure, said: "We are excited to partner with RStor to bring a new generation of capabilities to market."

Compute is an endpoint. How is it connected to a workload data set? RStor talks of its low-latency, high-bandwidth Connect optical network fabric, with 3.2Tbit/s speeds at the edge, which could mean very expensive wires.

CEO Giovanni Coglitore, a former senior director of hardware engineering at Facebook claimed it was: "a new internet based on a distributed network, where computing happens where data lives, is what customers today demand."

Taken literally, this sounds unlikely, because compute doesn't happen where data lives; no server processors physically move to storage repositories. Instead data gets to the remote processors faster than before.

What is actually involved?

There is none of the "chattiness" of TCP/IP, with RStor claiming it makes its WAN behave like a LAN.

We're told its Connect fabric can transfer 1TB from San Francisco to Singapore in 15 minutes.

Coglitore left in 2010 to become senior director for hardware engineering at Facebook, then CTO at Sony in 2015, getting involved in Open Compute Project-derived optical disk storage – the Optical Archive – until last year.

The product is operating in preview mode and you can find out more here (though registration is required). ®