Blame everything on 'computer error' – no one will contradict you

Something for the Weekend, Sir? Please pass on my regards to Mrs Cromwell for selling me her fig.

What's that? You can't? Your email isn't working? Maybe that's because you are trying to log into Gmail with your Yahoo ID. That's right, they are different. They are supposed to be different.

Yes, really. No, the computer isn't broken. You're broken, perhaps.

This has been going on all day and I'm not even at work. Instead, I am on a pleasant jaunt to Ely in Cambridgeshire, a tiny British city-town famed for its unique cathedral and for being the family home of warty 17th century Member of Parliament and religious psychopath Oliver Cromwell.

It began when I collected the train tickets from a machine at my local railway station first thing in the morning. I booked these online using a smartphone app the night before; that was the easy bit. The difficult bit was converting the virtual ticket into a real one, because this requires physical human effort to make it happen.

The machine's touchscreen happily accepted my collection code, cheerfully informed me that it was unable to print the tickets and wished me a good day. Only then did I notice the ominous red light flickering intermittently above the terminal. This usually means it needs refilling with blank cardboard tickets. By a person.

I queued up at the ticket desk, staffed by a sour-faced human who appeared to have completed Udemy's "Look Bored As Fuck" course (only $11.99 this week only!) and, in common with most of his fellow humans working in the public transport industry, entertaining little appreciation of the concept of urgency. Still, there were only two other people queuing in front of me, so I still expected to catch my train.

Half an hour later, I reached the head of the queue. I explained to the bored man behind the glass – judging from the expression on his face, I am thankful the glass is there to protect me – that the ticket machine is not dispensing tickets. He sighed and grumbled there was probably a computer error.

I suggested the computer is probably working just fine but the machine simply needs to be restocked. If I had been expecting him to spring into action, I was to be disappointed. All I got was another sigh and a long, lazy stare from dead eyes.

Insisting it really was the ticketing systems at fault, and entirely without any awareness of irony or contradiction, he tapped my booking code into the terminal in front of him and printed out my tickets.

And now here I am in Oliver Cromwell's house, grasping a souvenir bookmark and Mrs Cromwell's fig in a jar, while the nice lady at the cash till struggles to take my money. There is a problem. Ergo, it must be a computer problem.

Eventually, they accept my £4.30 in cash by operating the till manually. Proving that the payment problems are in no way due to user error – perish the thought – take a look at my manually entered till receipt. 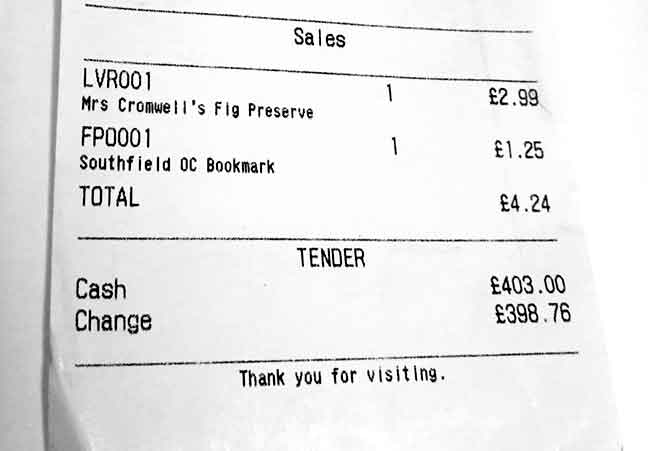 Sorry, I only have large denomination bills on me. Do you have change for a £403 note?

God help me, I think. Ah, now that's a good idea: let's pop round to God's house and ask for customer support.

I am now standing in a queue at Ely Cathedral to pay for a guided tour. There is only one person in front of me. This'll be quick.

Half an hour later, I reach the head of the queue. The otherwise blameless volunteer at the information desk appears to have mastered Udemy's "Advanced Flustered & Confused". After watching her try to use a Bluetooth mouse for another five minutes, I suspect she may even be the tutor.

As retail computer system operation goes, the setup and technique is extraordinary: the display is four feet to her left, the only free counter space for the mouse is four feet to her right. She is forced to twist her neck and lean in to read the display while stretching an arm almost behind her in the opposite direction to use the mouse, before snapping back to centre in order to attack the keyboard without being able to see what she's typing.

I can't decide whether this qualifies as ergonomically disastrous or intermediate Ashtanga yoga.

God's having computer problems too? Well well. Luckily I thought ahead and withdrew some more cash from a bank teller machine on the high street.

Mind you, this wasn't without difficulty either. I requested £60 but all that came out of the machine was three crisp £10 notes.

I called up the telephone banking line immediately to ask how much money they thought I'd just withdrawn. They confirmed it was £60 even though it wasn't. I told them my faith in the entire financial system and western civilisation as a whole was teetering on the brink because I'd just been mugged for £30 on the street and in broad daylight by my own bank. So they made further checks and admitted that other customers had been calling up that afternoon with the same complaint about the same cash machine.

It doesn't take a mathematician to determine what had happened: a human from the bank had stocked the £20 feeder inside the machine with £10 notes by mistake.

No, I'm wrong, apparently. Humans are infallible. It must a computer error. They seemed pretty insistent about that. Just like at TSB, I guess: it's the computers that have gone wrong so it's their fault.

So here I am, trying to pay for everything in cash because nobody today can operate a retail computer, and running out of cash because cash machines are stocked by contractors who have been specifically hired for their unique skill of not being able to recognise one type of bank note from another.

Sorry, I meant to say "because the computers have gone wrong".

Casting my mind back to Mrs Cromwell's beautifully preserved fig, it all begins to make sense. Computers, not being mentioned in The Bible, must be sinful.

Alistair Dabbs is a freelance technology tart, juggling tech journalism, training and digital publishing. He acknowledges that computers can and do go wrong, frequently and wilfully. They are bastards. If ever you need someone to hold down your computer while you give it a kicking, he's your man.