Lakes on the moon? Boffins think they've found the evidence

Watery remains of meteorites could be trapped in craters

A team of physicists have uncovered evidence that the Moon may have had liquid water on its surface at one point.

The team of Japanese and German researchers probed 13 different lunar meteorites using micro-Raman spectrometry, electron microscopy, and synchrotron angle-dispersive x-ray diffraction to work out the different minerals in the rocks.

Scientists produce a map marking water hotspots on the Moon

One meteorite, dubbed NWA 2727, was first discovered in northwest Africa over a decade ago. The team found traces of moganite, a grey-coloured oxide mineral with the chemical formula SiO2 (silicon dioxide) locked inside. The results have been published in Science Advances, and hint that the Moon may have had a murky, watery past.

On Earth, moganite can only form when pools of alkaline fluids are trapped under high pressures. A series of experiments ruled out that the moganite samples were created on Earth, meaning they are most likely formed on the moon itself.

But, where could the liquids come from on the Moon? The researchers reckon that chunks of meteorites or left over asteroid material from the early solar system collided with the Moon and brought alkaline liquids that got trapped within its surface. The fluids, together with the impact, kickstarted the formation of moganite on the Moon. A heavier impact from a comet or asteroid would have dislodged the moon’s surface containing the moganite and hurled it to Earth. 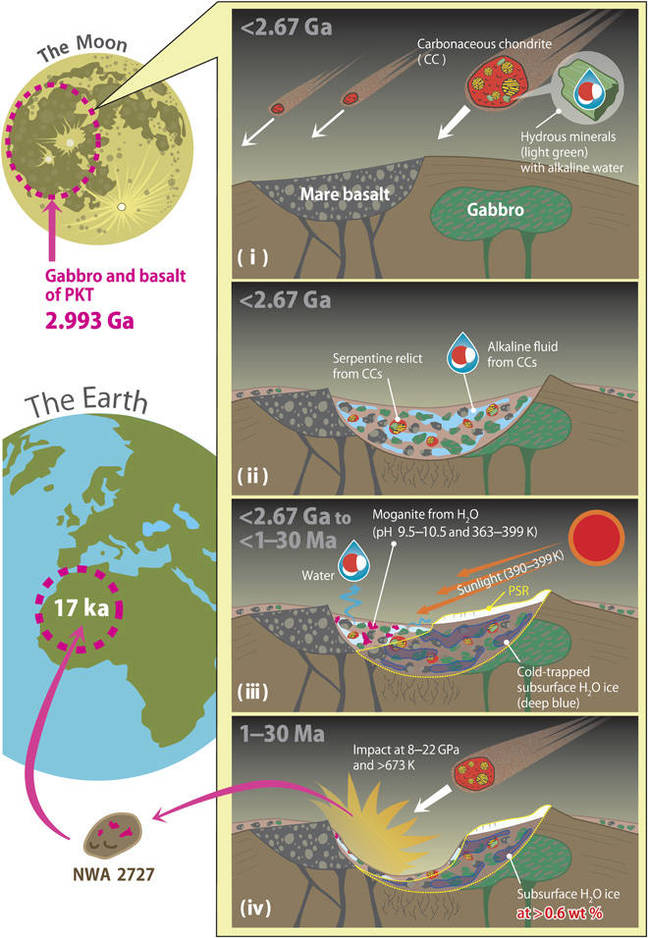 The process of forming moganite on the Moon, and the lunar meteorite arriving on Earth. Image credit: Kayama et al and Science Advances.

Previous missions to the Moon by the Apollo program revealed that the satellite was bone dry. However, water ice has been found concentrated near its poles, and could accumulate as ice below its surface at roughly a few parts per million.

Traces of the water ice, however, have not been reported from Apollo or Luna rocks or lunar meteorites, making it difficult to estimate just how much water the Moon might hold.

There is a possibility that there may be even be large quantities of water reserves in the Moon’s craters. “[The trapped ice] indicates the possibility of the presence of abundant available water resources underneath local sites of the host bodies within the Procellarum KREEP and South Pole Aitken terranes,” the paper said. ®

There's iron in them hills, maybe