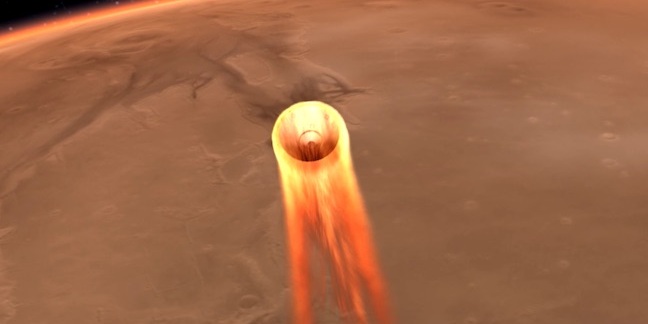 NASA depiction of InSight in Mars' atmosphere on November 26th, 2018

VID NASA’s successfully launched Mars InSight, the probe it hopes will help us to understand the interior of the Red Planet and therefore a little more about how rocky planets form.

Mars InSight (Interior Exploration using Seismic Investigations, Geodesy and Heat Transport) was supposed to be on Mars already, but missed its 2016 launch date due to damage to its primary instrument. Fixing that up and sorting everything out meant we had to wait until Saturday, May 5th, 2018 for the much-anticipated launch.

Which we can now say – phew! – went off without a hitch!

NASA’s detailed the launch and said that all went well, InSight is now on its way to Mars, as are its two ridealong CubeSats.

Barring a space oddity, things will be pretty boring until November 26th, when the probe attempts a landing.

InSight will use technology pioneered by 2008’s Phoenix lander, which descended under a parachute. The mission eschewed the “sky crane” used by the Curiosity rover, because that rocket-powered apparatus is heavy.

Come November 26th, 2018, InSight will reach Mars travelling at 6.3 kilometres per second. The 608kg probe will then attempt a landing in the following three phases:

The landing will be tricky because InSight is heavier than Phoenix and will be moving faster on arrival.

It’s also going to land on a higher part of Mars than Phoenix, so will have less in-atmosphere time to slow it down. It will also arrive at a time of year known to feature sandstorms. The probe’s therefore been given a thicker heat shield and stronger parachute.

All of which should get the job done, but should also make for some squeaky bum moments around November 26th. ®

NASA's crap infosec could be 'significant threat' to space ops