As JavaScript is popped into Excel spreadsheets

Build During the second day of its Build developer conference in Seattle, Washington, on Tuesday, Microsoft shined the spotlight on Microsoft 365, its year-old swirl of software and services made by whipping Office 365, Windows 10, and Enterprise Mobility and Security (EMS) into a single confection – a suite.

In vendor-speak, this is called a solution, or for a more social framing, an experience.

As is often done at such events, numbers were hauled out as a stand-in for significance: Belfiore said there are 135 million commercial monthly active users of Office 365, and more than 200,000 organizations using Microsoft Teams. That counts for something.

The world is becoming a computer, says CEO of worldwide computer company Microsoft

Belfiore recapped the themes sounded by CEO Satya Nadella on Monday, such as the need for more responsible development of technology.

"We want to do things because they're the right thing to do, not just because we can," the veep said.

Shortly afterward, he mentioned that Google is holding its developer conference simultaneously, and may touch on similar themes. "Ethics and responsibility," he said. "I'm sure we'll hear from Google about that."

It wasn't clear whether he was being sarcastic or sincere.

Amid Microsoft's infatuation with the cloud and artificial intelligence, Windows doesn't quite get the love once showered on it. Though it's no longer the main attraction, it continues to adapt to a world where much of the mobile hardware runs other operating systems. An example of this evolution arrives in a Windows Insider build this week: the Your Phone app, which provides PC users with an on-screen window displaying phone content.

Think of it as the opposite of embrace, extend, extinguish: surrender, surround, subsume.

Microsoft Edge browsing sessions on iPhone or iPad, visible via the Timeline in Windows 10, will soon show up in iPhones through Edge. Timeline is an application activity log that's similar to a browser history list but spans operating systems and devices. It's arguably the most interesting Windows feature at the moment. Here's a demonstration of it...

Timeline relies on apps to report activity through the Microsoft Graph API, so Belfiore urged developers to have their apps connect to Timeline, to make the service more useful.

Belfiore said Microsoft is working on an Insider Build feature that will allow Cortana to make proactive suggestions, based on Timeline and Graph data, about where to resume working based on where the Windows user left off.

Bringing Timeline to iPhone, and soon Android, fits into Microsoft's goal of making phones a part of the Windows experience. "We're really focused on making your phone a great second screen for your PC," said Shilpa Ranganathan, general manager of Windows Mobility Solutions.

The Windows 10 Sets feature, by which windows can be made to display apps as window tabs, gives developers another organization and engagement option. Belfiore suggested Sets offers a better way to work than relying on dozens of open browser tabs. It will ship, he said, "when we think it's great."

Given the nature of software development, there's no telling when that might be. 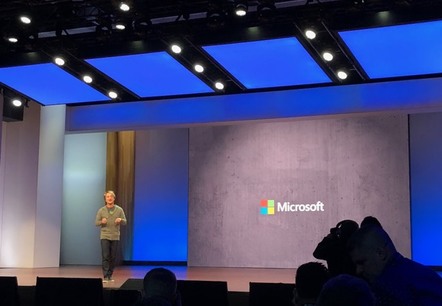 Talk about sparse array ... Joe Belfiore on stage at Build

The Microsoft Launcher app on Android will be fitted with hooks for Enterprise customers, enabling, for example, the discovery of line of business apps discovery during configuration.

Microsoft updated its Teams APIs in the Microsoft Graph to help companies create applications that fit their organizations and publish them to the Teams app store.

SharePoint burrowed deeper into Teams. Now users can pin a SharePoint page into Teams channels and developers can uses front-end frameworks like React in those pages.

Designers saw some love with the arrival of UWP XAML Islands, which sounds like tropical paradise facing a vowel shortage but in fact provides a way to create XAML controls that work across Windows Forms, WPF or Win32 apps.

This means all Windows applications can access the Fluent Design System regardless of the user-interface stack.

.NET Core 3.0, the open source, cross-platform flavor of Microsoft’s .NET, got a target release date, as we mentioned on Monday.

Kevin Gallo, head of Windows developer platform, said the revision will allow developers to run multiple instances of .NET side by side on same computer.

MSIX, a container-based system for packing and unpacking apps from a variety of platforms into a format suitable for the Microsoft Store, received mention. Introduced last year, it continues to improve. It now supports both enterprise management and Microsoft Store, in conjunction with a managed security model.

"Our mission is to make Windows the best dev box for you," said Gallo.

Whatever else it is, the Windows platform should soon offer developers the best bang for the buck: Belfiore highlighted plans to improve the share of revenue developers get for Microsoft Store app sales.

Basically, you can use JavaScript in your spreadsheet to add extra functions, alongside the usual things like SUM(), including fetching stuff from the web. You can also use Python with online machine-learning tools to process data within a spreadsheet.

You need to follow these steps and then these steps to get the JavaScript add-ins to work. One hopes it's sufficiently sandboxed, though.

Windows Machine Learning, or Windows ML as it's known among friends, was revisited. Announced at a developer event in March, it allows Windows users to add machine-learning models, trained on local devices rather than some bill-by-the-minute cloud, to their apps.

Finally, Microsoft 365 will now support Adaptive Cards, which let developers present flashy notification messages from apps, bots and the like in Teams and Outlook. Adaptive Cards will also support payments, allowing users to pay bills through Outlook emails. There's a big bunch of links to Microsoft's Office 365 updates here, if you're interested.

Belfiore closed by noting that with all the cited features coming to Windows 10, now's the time for developers to start registering app activities with the Microsoft Graph.

Graph data, he said, is your data, a declaration intended to distance Microsoft from less privacy-conscious peers.

"You control it and you manage it," he said.

If only Facebook CEO Mark Zuckerberg hadn't poisoned the well by saying the same thing. ®