The Royal Navy has acquired a search-and-destroy robot boat intended for destroying mines.

A first for Britain's naval service, the roboat, built by German firm Atlas Elektronik's UK subsidiary, drives itself around the high seas towing three auxiliary boats fitted with electro-acoustic transmitters. The transmitters generate pings that trigger modern digital mines at a safe distance from either the roboat flotilla or actual human-carrying shipping.

So far the MoD's £13m contract with Atlas has netted it one complete boat-with-gear system on an R&D basis, with options available to buy more. The trials boat has just been handed over to the RN following proving of the design’s detect-and-avoid algorithms in what appears to be a live training data-versus-AI comparison exercise.

In maritime terms, the roboats comply with the International Regulations for the Prevention of Collisions at Sea (known as the Colregs – they're the seagoing version of the Highway Code), though The Register would be most intrigued to see how they cope with scenarios that end up invoking rule 2(b).*

"This autonomous minesweeper takes us a step closer to taking our crews out of danger and allowing us to safely clear sea lanes of explosives, whether that's supporting trade in global waters and around the British coastline, or protecting our ships and shores," said defence procurement minister Guto Bebb in the usual canned quote.

While the idea of sea mines probably invokes that scene in cult classic film Hot Fuzz**, the technique of planting explosives in the sea to blow up passing ships has evolved a fair bit since the First and Second World Wars, with the traditional spike triggers replaced by modern magnetic-acoustic detection tech and other dastardly ways of blowing up passing warships and valuable tankers.

In British strategic terms, the biggest threat posed to our national interests by sea mines is what would happen to the economy if a naughty state closed a vital UK imports sea lane using mines.

Take, for example, the Strait of Hormuz, through which around a third of the world's seaborne petroleum exports passes – including the majority of Britain's liquefied natural gas (LNG) imports from Qatar: 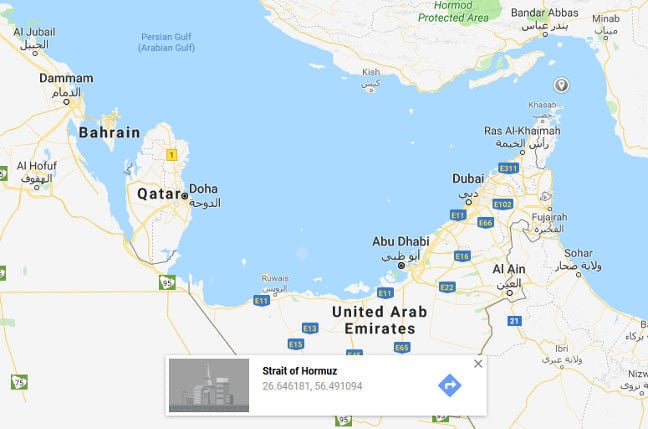 The Strait of Hormuz, marked with the grey pin at top right. Pic: Google Maps. Click to enlarge

On the north of the strait is the internationally renowned naughty state of Iran. Iran has a sizeable sea mine capability, which means the rest of the world has to pay close attention in case the Iranians get irate enough, for whatever reason, to close the strait. In (overly) simple terms, mining the strait would lead to severe problems with the British gas grid. Tankers coming to pick up Qatari LNG would be forced to divert elsewhere, greatly increasing the time taken for bought-and-paid-for gas to get from the Qatari fields to your two-ring hob in Swindon.

As part of the international effort to deter the Iranians (or anyone else, for that matter) from mining the strait, the Royal Navy has a permanent presence in the Gulf at the HMS Jufair naval base in Bahrain – west of the Strait of Hormuz. Four minesweepers and a Royal Fleet Auxiliary ship, a headquarters vessel, are based there.

The Atlas Elektronik roboat, therefore, is a help to the RN by extending what the four minesweepers are capable of doing on their own. Who needs an expensive warship manned with expensive sailors, necessarily carrying expensive weaponry, putting themselves at risk when you can send a roboat off to safely detonate any mines laid by your foes?

Atlas, along with the RN's Maritime Autonomous Systems Trials Team, has been putting the ARCIMS boat through its paces, with MoD civil servant Neal Lawson, of the Defence Equipment and Support ship-buying organisation, telling the world:

"The autonomous minesweeper offers a commander the ability to defeat mines that cannot be countered by current hunting techniques and significantly reduces the risk to crew members in pressured and time-constrained operations."

Robot boats are one of the areas the Navy is pursuing with great vigour, as much to ease its manpower shortages as for extending what it can achieve without spending too much money in the process, in the context of the defence budget's £20bn black hole. ®

* Rule 2, as published (PDF) by the Department for Transport, states: "Construing and complying with these Rules due regard shall be had to all dangers of navigation and collision and to any special circumstances, including the limitations of the vessels involved, which may make a departure from these Rules necessary to avoid immediate danger."

** That Hot Fuzz sea mine scene: