By the 2020s, boffins hope, a hockey-puck-shaped silicon and germanium crystal 2,000 metres below Canada will show a brief, tiny vibration, meaning a dark matter particle has collided with it.

Dark matter has a big problem: scientists can detect its effects on the macro scale, but have never successfully detected any of the hypothesised particles that make it up.

The answer, scientists hope, is to build more sensitive experiments, and that's what Stanford University's SLAC National Accelerator Laboratory has just started to do. With US$34 million of funding secured, the lab has announced the start of construction of an experiment to try and detect WIMPs (Weakly Interacting Massive Particles).

Named the SuperCDMS (Cryogenic Dark Matter Search), the experiment will be built at SNOLAB – the Sudbury Neutrino Observatory, a former nickel mine 2km underground in Ontario, Canada. 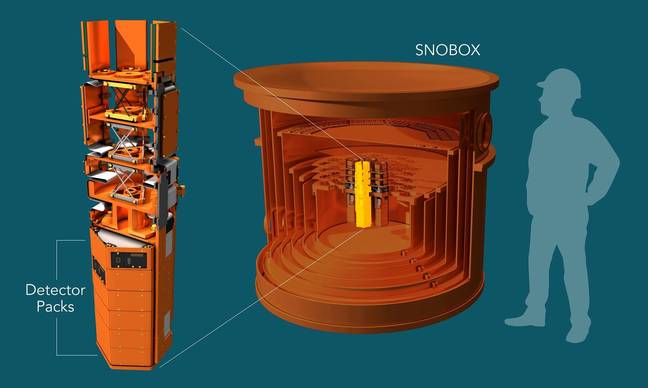 To conduct the experiment, the institutions will build four detector towers, each with six detector packs, at SNOLAB. These will be mounted in a cryogenic chamber, SNOBOX, cooled to below 0.04 K (-459.6° Fahrenheit, about -273° Celsius).

The silicon-germanium crystal detectors are designed to vibrate just a tiny bit, if an incoming WIMP manages to collide with it.

Theorists expect the collisions to produce “pairs of electrons and electron deficiencies [in transistors, for example, these are referred to as “holes” – El Reg] that move through the crystals, triggering additional atomic vibrations that amplify the signal from the dark matter collision.”

As SLAC's announcement explained, recent tests of a prototype detector showed SuperCDMS would have “high enough energy resolution, as well as detector electronics with low enough noise to accomplish our research goals,” according to Paul Brink of the Kavliu Institute for Particle Astrophysics and Cosmology (KIPAC).

They expect SuperCDMS to be more 50 times as sensitive as SLAC's previous instrument, the non-super-plain-old-CDMS, giving it a better chance to detect at least some properties of WIMPs.

In particular, KIPAC SuperCDMS head Richard Partridge said, that will allow the experiment to search for relatively light WIMPs, “in a mass range from a fraction of the proton mass to about 10 proton masses.”

SuperCDMS is a collaboration of 111 boffins from 26 institutions. ®