It's enough to make you pinky swear

Updated T-Mobile owner Deutsche Telekom is making legal threats against a small British business – on the grounds that the German company has an exclusive trademark on a shade of the colour magenta.

James Ridsdale, MD of Brighton-based business Datajar, said he was stunned after receiving a letter demanding he drop his own company's trademark application because the firm's logo happened to be pigmented in a particularly purplish pink.

A letter sent by London law firm Hogan Lovells on behalf of Deutsche Telekom (DT), seen by The Register and received by Ridsdale last Friday, stated:

DT owns the T-Mobile brand in the UK, selling handsets and related hardware as well as providing mobile network operator services. Datajar is a small software house (six employees) specialising in Apple device data management for businesses. Nonetheless, DT claimed that the Great British Public (bless their silly little heads) might get the two companies mixed up as a result of the pinkness:

"The consumer might, for example, erroneously believe that there is a commercial or economic connection between our clients."

Ridsdale sighed to El Reg: "We don't sell hardware on any level; we're not a telecommunications company. Because we're in IT they want us to stop using the colour."

EU intellectual property law allowed DT to trademark the particular shade of magenta in the year 2000, with Hogan Lovells' lawyers (who didn't sign their names to the letter to Datajar, instead scrawling "Hogan Lovells International LLP" at the end of it) commenting in their letter to Ridsdale: "Our client finds it highly surprising that the [UK Intellectual Property Office] examiner allowed this application to progress to publication." 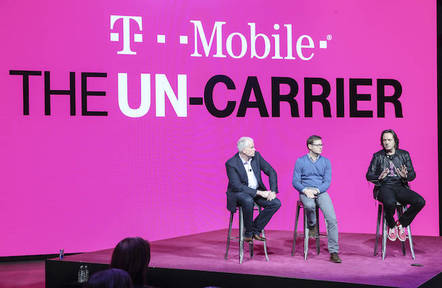 A quick look at the Deutsche Telekom trademark itself reveals that DT holds the rights for "Magenta (RAL 4010 telemagenta)". That's it; there is no other description than a big square of the controversial colour. A free online colour converter showed us that RAL 4010 converts to RGB 188, 64, 119. That's important because Datajar's style guide, a copy of which Ridsdale sent El Reg, clearly specifies its house pink as RGB 225, 96, 163 – a subtly different shade, as can be seen above.

Nonetheless, DT demanded Ridsdale "immediately write to the UKIPO requesting the deletion" of his trademark application and "cease and desist… from all use of the Figurative Sign and the colour magenta and closely similar colour shades".

"It's unfair and it's absolutely ridiculous," said Ridsdale. "If we were called D-Mobile or something like that and you could see the logo was in Times New Roman and obviously we were selling mobile phones or something like that… but we're not. We probably have more Macs under management than anything else."

DT had failed to respond to The Register's invitation to provide its reasons for the legal missive fired at Datajar.

A decade ago the German firm also tried putting the frighteners on a technology blog using the colour pink; the plucky little upstart told them to sod off. American mobile network operator AT&T, however, wasn't so lucky in the American courts a few years ago.

British readers fending off other patent trolls may be interested in the Intellectual Property (Unjustified Threats) Act 2017, which allows people targeted by low-lives to sue them after receiving a groundless IP threat. ®

After publication of this article Deutsche Telekom's Rene Bresgen got in touch with us to say: "Deutsche Telekom sets high value on the integrity of a fair market and the business contributions of every market participant. Since more than 20 years Deutsche Telekom invested in a unique market identity, consisting of the color Magenta. Our company was granted as a registered trademark right for Magenta. The color builds a central part of Deutsche Telekom's business activities. The protection is essential for any trademark owner. Hope this information helps."

Company had hoped deal would grant access to $300m trust account, but shareholders cleared it out
HPC9 Aug 2022 | 1