LOGOWATCH ServiceNow’s ramped up its efforts to excite buyers and users beyond the IT department, with a new logo and a pledge to deliver consumer-style experiences in the workplace to change the very nature of the mucky business of exchanging your labour for currency.

Speaking at the company’s Knowledge18 conference in Las Vegas, CEO John Donahoe drew on his experience as eBay’s CEO and noted that while the smartphone revolution has simplified a great many chores for consumers, “we put up with terrible experiences at work.”

ServiceNow has given itself the mission to fix that and even to change work itself. Donahoe even outlined a new statement of purpose - “We make the world of work, work better for people” – to articulate the mission.

Which is just so now, although Donahoe also made sure his ambition can’t be mistaken for an automation-led destruction of jobs. “Some companies believe in tech for its own sake and they worry about second-order impacts later,” he said, in what sounded like a pledge to be non-disruptively disruptive. “We think technology must serve people.”

This is all a bit of a departure from ServiceNow’s roots as an automator of ITSM and reflects the fact that by adding customer service and HR apps the company has for years sought to diversify beyond the IT department.

Donahoe was hired in part to accelerate that diversification. But he joined ServiceNow not long before last year’s Knowledge conference. This year his keynote address felt a lot like the CEO putting his stamp on the organisation after a year in the chair. Indeed, he said he’s conducted a “global purpose tour” to explain this vision to ServiceNow staff.

There’s not yet much to show for the vision in terms of new product. Not that there needs to be: ServiceNow’s workflow and automation engines are broadly applicable and its HR and customer service offerings mature. It doesn’t need major change and nothing of note emerged at Knowledge.

The company did last week announce the acquisition of Parlo, a firm that uses AI to interpret natural language. ServiceNow will bake Parlo into its platforms and into chatbots that can either respond to requests or route them into workflows. The company also announced that it’s close to refreshing the mobile versions of its products, to offer better experiences on smartphones and tablets.

But the conference has, to date, yielded no news of future functions. There was news of a survey that concluded - surprise! – that HR managers need what ServiceNow offers.

Beyond that the most significant announcement to date has been a new logo that replaces the on/off button that once served as the “o” in “Now” with “a human form … to place people, rather than technology, at the center of the brand.”

Interestingly, the new logo is truncated to just “Now” on the company’s home page and some other uses, emphasising the “Now platform” and making ITSM less prominent.

The new brand’s clearly also emphasising ServiceNow’s desire to sell beyond IT. There are already signs that doing so is helping the company to grow: in Q1 results announced a fortnight ago the company revealed revenue of $543 million, for year-over-year growth of 40 per cent. That growth was fuelled by 16 of the company’s top 20 deals including three or more products. The company also pointed to three new Customer Service Management deals with more than $1 million and half a dozen deals of the same size with its HR product, records sales levels for that offering.

Net income hit $105m and the share price popped nicely, since hitting record levels over US$176.

Investors clearly think Donahoe is steering the company in the right direction. Now it’s up to your fellows beyond the data centre to do likewise! ®

UPDATE, MAY 11th: The chatbot we mentioned above was launched the day after we posted this story. ServiceNow's called it the "Virtual Agent" and says it is capable of resolving issues by hooking into other bits of the Now platform instead of just answering basic questions. The company offered resetting passwords as an example of the bot's capabilities. There's also integration with Microsoft Teams, Slack or ServiceNow chat clients, to enable cross-platform chats with the 'bot. 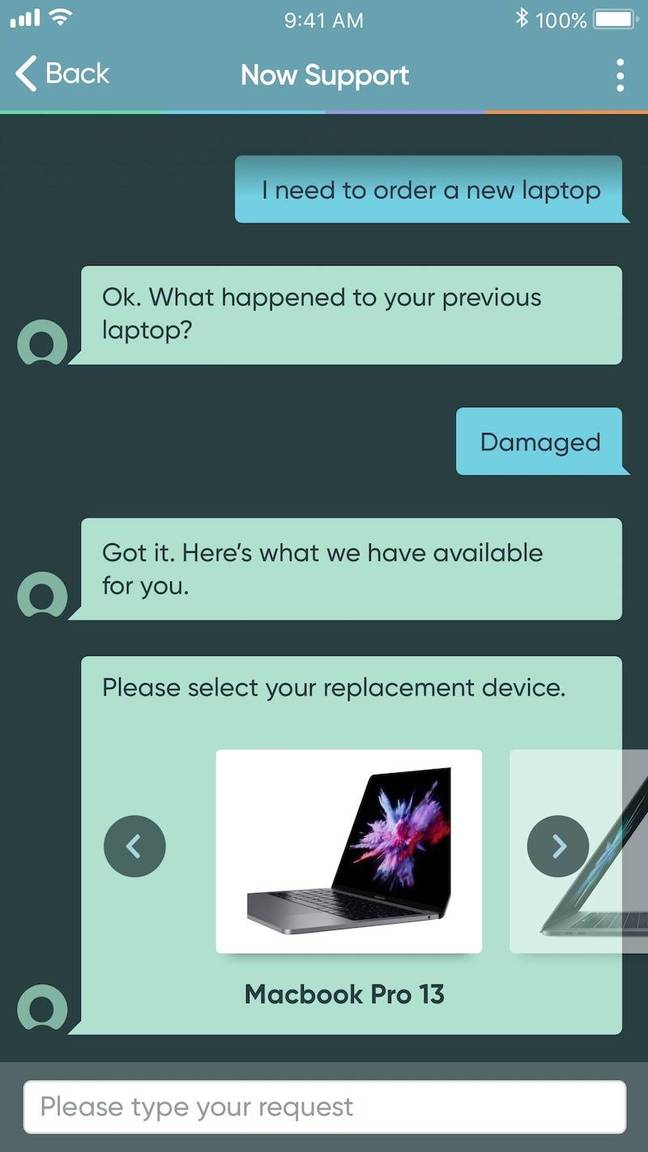 He either missed the memo or doesn't believe it

No, not the Nottingham-born designer of natty suits, the former Proctor & Gamble chap who also spent time in the channel

Nice for some: ServiceNow margins swell 83% as post-COVID market wolfs down subscriptions

Biz is not going to make any impact in core areas – but there's much more to life than HR, supply chains, accounting, analyst tells us

The. Defining. Enterprise. Software. Company. Of. The. 21st. Century

'If that is true, that is a horrendous admission' – analyst

Humble-bragging ServiceNow CEO tells anyone who listens: 'Our destiny is to become the defining enterprise software biz of 21st century'

Always be closing, especially when the economy's in a tailspin