Hitachi Vantara has updated its VSP all-flash and hybrid storage arrays and their SVOS operating system, and provided AI-based operations tools to make operating them easier.

The arrays are divided into all-flash F-series and hybrid flash/disk G-series. The previous F-series used either SSDs, maxing out at 3.84GB or proprietary flash module drives (FMDs) which topped out at 14TB. The new F-series use the same FMDs but SSD capacity now reaches 15TB, which has had far-reaching effects in both the F-series all-flash arrays and G-Series hybrids.

In general, Hitachi Vantara said, they have up to 70 per cent more IOPS per core for increased price/performance; the Skylake effect we imagine. They also have greater consolidation, with 8x more volumes and one million snapshots per system, and improved data efficiency: up to 3.4x faster deduplication and 5x faster SVOS-based compression.

A look at the IOPS performance and GB/sec bandwidth numbers can be used to position the old and new models: 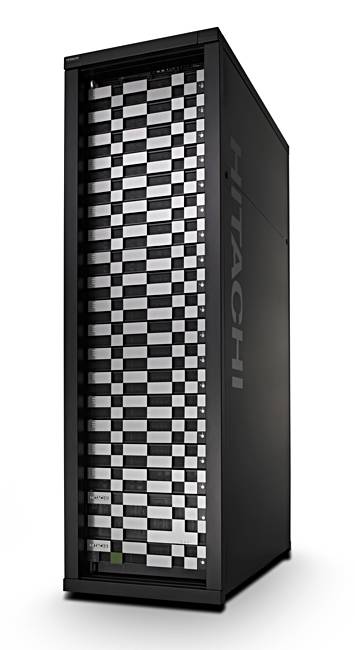 The F-series capacity levels have changed markedly, with the old model quartet having maximum internal capacities much smaller than the new quintet, due to the emergence of 15TB SSDs and the non-upgrading of the 14PB FMDs:

The F-series and G-series support Fibre Channel and SCSI connections with the F and G1500s supporting FICON and FCoE as well.

Unlike HPE Nimble and NetApp with its AF800, Hitachi Vantara has not said anything in public about the adoption of NVMe-over-fabrics and storage-class memory (SCM). If this represents a real roadmap absence then these F-series arrays will face being at a considerable disadvantage concerning access latency.

With the largest disk drive in the G-series being 10TB and the same 15TB SSDs being available, then maximum capacity is now driven by SSD use instead of disk drive use. The new G900, for example, can have 14.1 PB of capacity using 10TB disk drives or 17.4 PB using 15TB SSDs:

Capacities of the new G-series using small or large format disks and the 14TB FMDs are lower than the maximum numbers above.

Hitachi Vantara said its VSP arrays are available with a 100 per cent data availability guarantee (PDF). Infinidat said its arrays have seven nines (99.99999 per cent uptime).

Developers can run more workloads in a single system through Docker. OPenStack and Redhat Openshift container integration with Swarm and Kubernetes orchestration.

Hitachi Vantara said SVOS has up to 240 per cent faster data reduction and inline operations. It has up to 8x more volumes and 1 million snapshots, up to 25 per cent lower latency and 70 per cent more IO per core, with no detailed numbers being provided. 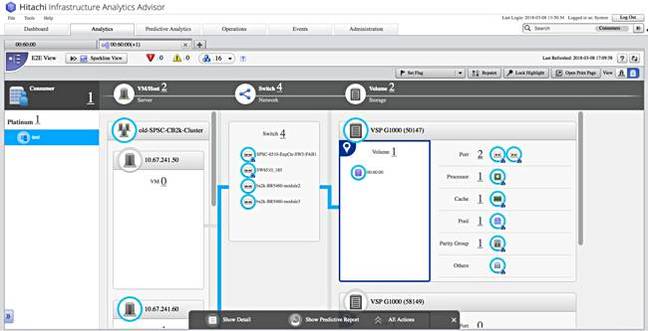 It has been updated to:

Hitachi Vantara's VSP is one of four classic big iron arrays - the others being Dell EMC's PowerMax, IBM's DS8000 and Infinidat's Infinibox. HPE has its XP which is an OEM"d version of Hitachi's VSP. So far HPE has not said anything about taking this new VSP family of products on board.

The lack of NVMe-oF and SCM from a public technology roadmap, especially given its adoption by Dell EMC, IBM, Kaminario, NetApp and Pure plus startups like Apeiron (with similar speed tech)E8, Excelero and Pavilion, could put Hitachi Vantara at a disadvantage in access latency-sensitive workloads.

We would imagine both NVMe-oF and SCM are on the company's private technology roadmap.

The overtaking by 15TB SSDs of the company's 14TB capacity FMDs implies that FMD upgrade may have been abandoned or slowed. We've asked Hitachi Vantara about this and whether it may adopt ruler-format SSDs.

The AI-driven and automated operations tools could provide an advantage operations-wise versus the VSP's competitors, but that will need to be proved in real operational life.

These offerings are now available both independently and packaged together with Hitachi Vantara VSP. No pricing and detailed availability information has been provided for the new arrays. ®