Still making it rain for MS

Growth in spending on cloud by certain sectors of the UK government looks to be coming to a juddering halt, according to information provided under Freedom of Information (FoI) and open data.

And contrary to the rest of the world, where Amazon’s AWS is number one, it is Microsoft’s Azure that’s the market-share leader with UK Gov apparently having transferred its on-prem love affair with Redmond to cloud.

The Ministry of Defence (MoD) and the Land Registry are among organisations that look set to spend less on cloud services in 2017-18 than in 2016-17, according to responses to FoI requests from The Register. Others including HM Revenue and Customs and NHS Digital have spent more than in the previous year, but high rates of growth appear to be a thing of the past.

But several that are increasing spending are doing so at a gentler pace than before. NHS Digital, which runs national information, data and IT services for the National Health Service in England, said that from April to December 2017 it had already spent £1.88m, more than 2016-17’s £1.34m.

The picture is confirmed by the open spending data from the government’s cloud computing G-Cloud digital marketplace. This takes a fairly broad definition of cloud computing, including services such as training and planning, but provides an overview. It shows steady rises in almost every quarter until the last quarter of 2016, when £247.6m went through the framework, 52 per cent more than a year previously. Then things changed, and October to December 2017 saw £250.6m spent through G-Cloud, up just one per cent year on year. 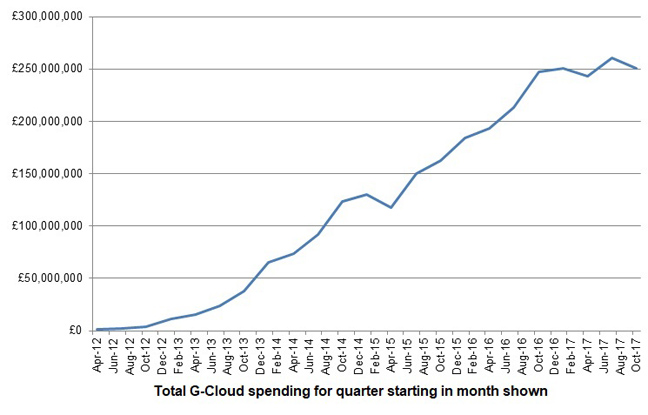 The G-Cloud data includes Department for Work and Pensions (DWP) spending of £14.87m in 2015-16, £45.72m in 2016-17 and £34.75m in the first three quarters of 2017-18 – in response to an FoI request the DWP said to use its G-Cloud data. If the DWP carried on spending at that rate between January and March, the total would come to just over £46m – effectively level with last year. The DWP has followed the overall pattern of moving from acceleration to cruise control.

So why is growth slowing down? Cloud is clearly maturing as an option for central government organisations, with many already using it at scale, meaning that there is no longer as much untapped potential. Organisations who provided information under FoI talked about cloud being a key part of their strategies. “HMRC’s vision is to deploy its major IT systems and supporting infrastructure services onto UK based hyper scale cloud platforms” said the tax collection agency, while DWP said it works in line with the Government Digital Service’s cloud-first design principles.

But another reason may be that many parts of government are sticking to familiar IT services and suppliers as they adopt cloud computing. This is suggested by relative spending on Amazon Web Services (AWS) and Microsoft.

Globally, Microsoft is a distant second to AWS on cloud infrastructure sales. For the UK government, the inverse appears to be true.

Microsoft was particularly popular with smaller organisations, often taking all or most of their cloud spending. The Welsh Government only reported its cloud spending with Microsoft, saying it was not able to determine how much went to other suppliers.

The Northern Ireland Executive’s IT Assist shared service, run by its Department of Finance, gave Microsoft all of the £29,514 it spent on cloud services between April to December 2017, including platform as a service “for development and test environments, with a small number of Office 365 licenses in use”.

Kent County Council – the UK's largest council by population covered – put most of the £18,528 it spent on cloud in that period Microsoft's way, including all for its corporate functions, although it uses AWS as the main supplier for its EiS IT service for schools.

Other larger organisations are working to reduce their dependence on AWS. Great British mapping agency the Ordnance Survey, which uses cloud services for "both platform as a service and infrastructure for the development, test and production running of our internal (staff and organisation) and external (customer) facing systems and services," spent £670,000 (94 per cent) of its cloud budget with AWS in 2015-16 but this was down to £520,000 (54 per cent) for April-December 2017, with Microsoft taking the £450,000 balance.

Bigger departments are not so reliant on Microsoft, but are keen to diversify their cloud spending. HMRC uses multiple cloud hosting providers to reduce costs, a policy that has been blamed for Mancunian cloud service provider DataCentred going out of business last August. However, HMRC spent £1.22m with DataCentred in the first three-quarters of the 2017-18 financial year, more than the £916,000 it spent in all of 2016-17.

UKCloud, which provides services exclusively to the UK public sector, appears to have suffered more at the hands of HMRC’s diversification policy.

Open spending data for the first two months of this year suggests HMRC is buying into AWS in a big way, having already spent £2.85m. This includes £703,000 for "AWS G Cloud Deployment Program - Project Development" and the same amount as a prepayment for services. The two months also record payments to SystemsUp and Cloudreach – but nothing for UKCloud.

Meanwhile, the MoD spent much of its cloud budget with specialist suppliers, the largest being Crown Hosting Data Centres, a joint venture between the Cabinet Office and Ark Data Centres used by UK public sector clients, which received £2.16m (36 per cent) in 2016-17. Other big suppliers were Commerce Decisions, a division of QinetiQ (£2.15m in 2016-17) – although this supplier did not receive anything from the MoD in the first three quarters of 2017-18 – and SecureCloud+, a defence and public sector focused supplier (£1.36m, 23 per cent). AWS earned all of £17 from the MoD in 2016-17, rising to £32,000 for April-December 2017.

Large public sector organisations often prefer to use a range of specialist suppliers, particularly those such as the MoD with particular security requirements, and that applies to cloud as much as anything else. Smaller ones tend to be conservative – which often means sticking to Microsoft. These factors may limit Amazon’s ability to sell cloud services to UK government organisations, but may also limit what those organisations do with cloud.

As well as open data, this article is based on Freedom of Information requests to four Whitehall departments and three agencies – all major IT users – the UK’s three devolved national administrations and two of its largest local authorities. (The Home Office refused to provide data on security grounds, Birmingham City Council because of outsourcing its IT to Capita.

Several initially refused to provide data because they reckoned it would take more time to collect than FoI legislation allows, but agreed to a cut-down set of questions. Because of this, as well as differing treatments of VAT and interpretations of the concept of cloud computing, organisations’ responses may not be comparable. ®

* We asked for information in January – it took some organisations more than two months to provide a useful response – which is why the data covers to the end of the calendar year rather than the full 2017-18 financial year.