If you like Nutanix and you think it's XC... Bit barn boxes or ROBO

Dell teases high and low-end hyperconverged kit at .NEXT

Nutanix .NEXT attendees were this week furnished with details about a heavy duty server and skinny ROBO box – two new Nutanix-based hyperconverged systems from Dell.

The XC940-24 is based on a PowerEdge 940 server, which is a 3U, 4-socket system with up to 6TB of memory and 10 or 25GbitE connectivity. It can have a range of Xeon SP Platinum and Gold processors.

There are 24 x 2.5-inch drive bays which can be loaded with SAS disks or SAS/SATA/NVMe SSDs. Maximum SSD capacity is 60TB with all-flash systems while maximum disk capacity is 22 x 2.4TB.

Think of it as a 4-socket powerhouse for large scale-up analytics and other memory-intensive applications. Cop a datasheet here. 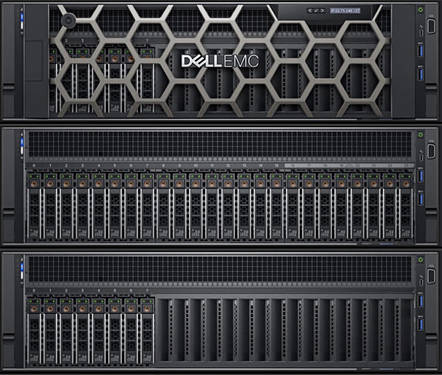 The XC640-4i is for remote office/branch office, retail sites and IoT edge deployments. It can be deployed in 1, 2 and 3-node setups.

The base server is a 640 PowerEdge, a 1U, dual-socket server for dense scale-out data centre computing and storage. The supported processors are Xeon Gold and Silver CPUs, with up to 384GB of DRAM.

It supports 4 x 3.5-inch SAS interface drives which can be SSDs or HDDs; up to two SSDS in hybrid systems. The maximum disk capacity is 8TB, with SSDS ranging from 400GB to 3.8TB.

A Life Cycle Management (LCM) facility for the XC systems can automatically update the BIOS and firmware for several components, and do it up to 70 per cent faster than a living, breathing admin.

Last one standing after Boeing's 2019 bail