Void Linux gave itself to the void, Korora needs a long siesta – life is hard for small distros

If you want your fave to survive, you'll need to dig deep

If you're new to Linux you'd be forgiven for thinking there are only a half-dozen distributions – names like Ubuntu, Fedora, openSUSE, and Red Hat Enterprise Linux tend to get most of the headlines.

These big distros tackle big projects like Wayland, systemd, Mir, and other tools that will, for better or worse, change Linux as we know it. The big fish always get the attention, if for no other reason than these are also the only distros with million-dollar companies backing them.

They are not, however, the end of the story. In fact there are hundreds, if not thousands, of distros out there that barely register on trackers like distrowatch.

Two such distros managed to shake the boat recently when, for separate but related reasons, they announced their closure.

The main developer of Void Linux has apparently disappeared. It's a small, independent distribution (not a fork), but does have more than one person working on it and more than a few users. It's notable for a couple of things – one is that it remains systemd-free, another is that it uses LibreSSL instead of OpenSSL. 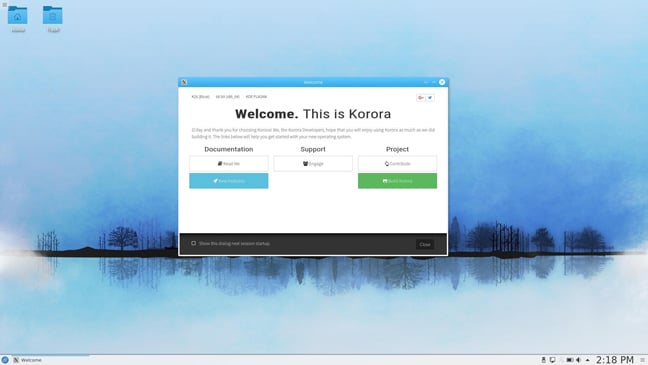 Has Korora succumbed to the fate of small Linux distros?

Other Void Linux developers recently took to the project's website to say they have "had no contact with [the main developer] since the end of January, and no meaningful contact for well over a year". Though that's bad, it wouldn't be the end of the world except that the main developer is the only one with the ability to manage much of Void's infrastructure, including the Void Linux GitHub account, IRC channels and domains.

The project has reached out to GitHub and Freenode, and says that the latter issue should be fixable, but GitHub has denied them access to the project (which is entirely in keeping with GitHub's ToS and account security practices, for all GitHub knows the project leader may not want Void Linux to continue).

If you're a Fedora fanboi, this latest release might break your heart a little

Another troubling tale comes from the Korora project, which is taking a break from development. Korora was based on Fedora, but added a bunch of things that haven't always been easy to get with stock Fedora, namely multimedia codecs and proprietary software. Korora also did a good job of setting some more user-friendly defaults than Fedora.

"We are taking a little sabbatical to avoid complete burn out and rejuvenate ourselves and our passion for Korora/Fedora and wider open source efforts," the developers write on the project's blog.

That's a fairly common fate for small Linux distros run by one or two developers, as most are. Most have no revenue to sustain them and they are something that the developers do in their spare time. As most of us know, spare time has a way of disappearing, often quite suddenly.

All these stories of small distros disappearing might be enough to put you off them.

And I wouldn't blame you, I'm a former Crunchbang user and I too felt burned when it disappeared. Crunchbang happens to have comeback, but by the time it arrived I had already moved on to a bigger distro that was less likely to disappear from under me. I picked Arch Linux in large part because, though it's still independent of any parent company, it has a large, dedicated user base and seems likely to be around in five years.

Take a chance on me

However, if the trend among users is moving against small distros, all Linux users may suffer, even those that never move away from the first distro they try.

Without people willing to take a chance on unknown but potentially really great distros, there would be no Linux Mint, no elementaryOS and no Solus, to name three recent, very popular arrivals in the Linux world.

All three are big now, but they got that way only because some people took a chance on them long ago. Adventurous Linux users tried them, perhaps even contributed to them, at least told their fellow Linux enthusiasts about them, and helped make them into the distros they are today. In the case of elementaryOS there's also a revenue model in place to help sustain it.

Linux Mint founder Clement Lefebvre reckons it's not entirely bad. He told me that while a lot of things have changed in the community since 2006, when Linux Mint started, it's still possible for small distros to grow. Could a new project replicate what Linux Mint and others have done in the past? "Yes, probably," Lefebvre told me, "but this has consistently been getting harder throughout the years, not only because some of these success stories are still here today but also because user expectations have grown considerably and that's a real challenge for anyone starting small."

The distros that seem to last – be they large or small – tend to be the ones that have some form of revenue. Whether that comes from users via donation as in the case of Linux Mint, or from a corporate backer as in the big-name distros, at the end of the day – in our culture – money matters.

Despite this, Lefebvre remains optimistic about the future of small distros. "I'm a firm believer in passion," he says. "If somebody's good at something and has the necessary skills and confidence to be successful, the only thing he needs is passion. I'm pretty sure we'll continue to see huge success stories in the future, particularly in niche markets, and also because of the changing nature of technology."

Unfortunately, if we all stop using small distros five years from now there will likely be no brilliant new up-and-comers.

As more companies, more developers, more desktop enthusiasts come to Linux, which they are – across the board if not on the desktop then certainly in behind-the-scenes infrastructures – there's going to be less willingness to take a punt on a smaller distro. There's a reason RHEL, CentOS and Ubuntu dominate the server market – they're backed by companies that other companies can understand. Corporate customers are always going to stick with the bigger distros for a variety of reasons such as reliability of support, the existence of a roadmap – things they, as corporations, can rely and bet their infrastructure on. This will pour more attention, more contributions, and, more importantly, more money into big projects like Ubuntu, RHEL, CentOS and openSUSE.

That's not necessarily a bad thing, but it may very well create a world of corporate-dominated "big Linux", where small distributions have a much harder time gaining a toehold. There's nothing inherently wrong with corporate-backed Linux, but it's entirely possible that the core developers at, to pick an easy target, Ubuntu, have goals and projects very different from what you want. Anyone love the Unity desktop? Too bad, Ubuntu doesn't.

Void Linux is good example of the opposite of this. If Void disappears, that's one less distro for those looking to avoid systemd (rather, Void used runit). At this point, if you don't want to use systemd, your options are seriously limited (Devuan, Gentoo, and perhaps some other small ones like Void).

Even if you don't care one way or the other about particular tools like systemd, there are other reasons that make small distros well worth your time. Perhaps the most difficult to quantify, but satisfying, is the personal experiences small distros can lead you through.

I'd credit Crunchbang with first getting me into minimalist desktops and more under-the-hood aspects of Linux. Crunchbang uses the Openbox window manager with no desktop. At the same time it manages to make that a very usable environment, something I'd never been able to do on my own. To this day I use an old Crunchbang theme for GTK apps.

The question becomes what does it take to sustain a Linux distro?

The answer seems to be one a lot of Linux users aren't going to like – money.

While there are always exceptions, the distros that seem to last – be they large or small – tend to be the ones that have some form of revenue. Whether that comes from users via donation as in the case of Linux Mint, or from a corporate backer as in the big-name distros, at the end of the day – in our culture – money matters.

Before you ask: no, that doesn't mean you should ignore distros that have no money. It just means that the distros that do have the money will likely last longer.

It's very likely that elementaryOS, which gets by on app store revenue and download donations, doesn't pull in much revenue compared to Ubuntu, but it does have a means in place that will enable it to grow in a sustainable way. And that's the key to a long-lasting distro. If there's no way to sustain that initial burst of energy and vision on the part of the person or persons who start things rolling, history shows pretty clearly that they will eventually either burn out or life will simply get in the way and then – poof – your distro is gone.

If you want your favourite distro to last, reach for your wallet and start to contribute. ®

New language will be official, probably within a couple of months
OSes5 Oct 2022 | 26