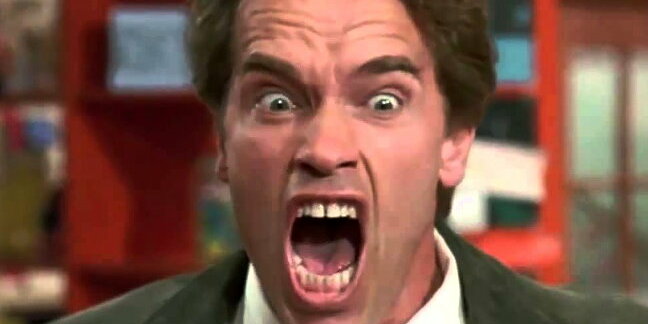 Arnie Schwarzenegger once did a voiceover promo for Waze

Shouting at your sat-nav may now result in something actually happening, whether or not you want it, thanks to Ford and navigation app Waze's inclusion of voice control.

The feature has been rolled out along with the ability to project the displays of iPhones running Waze onto Ford wagons' touchscreens.

"Our goal is to make it as easy as possible for people to access the smartphone features, apps and services they care about most in the car, without having to pick up their device," said Don Butler, exec director of connected vehicle platform and products at Ford.

The beam-to-touchscreen feature will be compatible with Ford cars running version 3.0 of its Sync 3 navigation system and iOS 11.3. Android users, seemingly, have to lump it.

Waze's unique selling point is that world+dog can use it to update traffic flow and related driving information (accidents, fuel prices and so on) in real time. This briefly put them into conflict with an American police trade union, some members of which were angry that Waze users were using it as a cop-spotting service to steer clear of mobile speed cameras. In America local police forces (as opposed to federal ones) typically receive money from speed traps and other motoring-related fines.

With typical urban British road conditions involving traffic jams and congestion a-plenty, your correspondent expects Waze voice control might lead the unwary to the giant todger that naughty users drew, in the form of roads and roundabouts, in Antarctica. Well-known adtech company Google, owners of Waze, told us at the time that the offending phallus was being removed. ®

Futuristic driverless car technology to be trialled on... oh, a Ford Mondeo

Updated Driven consortium floors it on the glamour front

Cost works out at about $1m per petabyte