The inventor who co-founded visual PIN company GrIDsure has become involved with another pattern-based authentication start-up in the hopes that the shoulder-surfer proof technology could replace two-factor authentication.

His new company, PinPlus, does away with passwords and PINs by combining a method for securely delivering one-time codes to users, with an architecture for storing users' login "secrets" on servers.

Instead of having to remember vulnerable passwords, users simply need to remember a pattern on a small (6 X 6) matrix of squares. This pattern (created once upon enrollment) guides the user in reading off frequently jumbled numbers from a matrix, each reading creating a unique code for each login. Stored patterns are then coded, segmented and stored in multiple data structures before they are further encrypted.

The difference between this pattern-based security product and others is its cryptographic strength, say its makers.

The idea is that even if a machine is compromised with malware or the login of a user is intercepted by a shoulder surfer, there will not be enough information spilled for hackers to determine the next login.

Steve Brittan, PinPlus chief exec, explained: "This part of the process is protected by three patent applications. The separate segments representing the users’ secrets are indexed using data references which themselves only point to the correct data if the correct one-time code is presented to the pin+ authentication engine, and then encrypted using strongly salted one-way SHA-256 hashing algorithms. 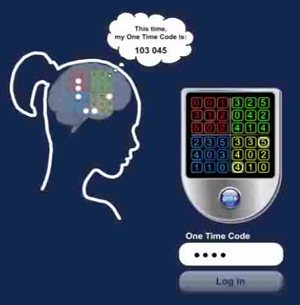 The how-to vid is available here

"Without this, it’s impossible for a hacker to assemble the correct segments, and to then attempt to decrypt the secret information is going to be incredibly difficult for hackers. The net effect is to dramatically enhance the 'entropy' or cryptographic strength offered by pin+."

The pin+ pattern-based authentication system is being positioned as an alternative to the ever-popular two-factor authentication systems - which at present mostly consist of text messages sent to registered mobile phones or the more traditional hardware key-fob tokens from the likes of RSA Security.

The pin+ system works without the user having to carry any kind of device or card, even a mobile phone. The approach also attempts to tackle the problem of hackers stealing large files of passwords or password hashes from insecure websites, as happened with the recent LinkedIn and eHarmony breaches, for example.

The firm's chairman, Jonathan Craymer, was originally involved in pattern-based authentication pioneer GrIDsure prior to founding PinPlus in 2010. Cryptocard acquired the patents and intellectual property of GrIDsure after the UK-based startup became insolvent in November 2011. Cryptocard was itself acquired by SafeNet months later in March 2012.

Craymer says the industry seems to have been "stuck" for some years, with SMS slowly taking over from tokens. He said the Matrix Pattern Authentication (MPA) technology of pin+ can be used by everyone, not just a few key banking customers or company employees.

"Our vision is to get MPA out there, leveraging a common front end, which can be bolted on to a whole host of back-end solutions created by partner companies," Craymer explained. "We meanwhile will concentrate on refining the science behind patterns, usability, security etc, and will be registering our own patents. Basically all this will build on, but be far superior to, the original GrIDsure idea."

Craymer explained the reason why he left GrIDsure in 2009, two years before its business went belly-up.

"GrIDsure simply didn’t have the right team capable of developing a complete product and creating a market – whereas pin+ most definitely has the right team behind it which I am confident will take it forward," Craymer told El Reg.

"I could see this was the case, so left GrIDsure (which I founded) in 2009, determined to do the job properly. As a result I did a lot of thinking about how to move what is a great concept (Matrix Pattern Authentication) forward, then to take those ideas to market I founded PinPlus Ltd in 2010.

"In my personal opinion the original GrIDsure product needed a great deal of additional development in a number of areas such as entropy, security and look and feel," he added. ®