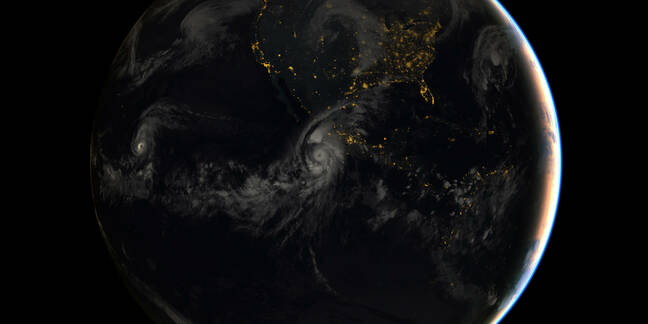 Satellite view of hurricane Patricia. Elements of this image furnished by NASA

A team of scientists today reported observing beams of antimatter firing from a ferocious hurricane on Earth for the first time.

Hurricane Patricia, the second most powerful tropical cyclone recorded so far, ripped through the west coast of Mexico in October 2015 drumming up winds of up to 215 miles per hour. It was the perfect opportunity to fly one of the US National Oceanic and Atmospheric Administration’s (NOAA) Hurricane Hunter aircraft out into the eye-wall of the storm.

It was there that the team finally discovered something long predicted by scientists.

The Airborne Detector for Energetic Lightning Emissions (ADELE) aboard the WP-3D Orion, a four-engine turboprop aircraft, detects gamma rays. Terrestrial gamma ray flashes (TGFs), were first spotted in 1994 and are emitted during flashes of lightning.

They are produced when relativistic electrons, whipped up by the strong electric fields in the thunderstorm, bump into atoms. The impact creates gamma-ray photons seen as TGFs and knocks off electrons from the atoms, creating a shower of more relativistic electrons. It was also predicted that positrons, the antimatter counterpart of electrons, would also be emitted during the process, known as pair production.

“This is the first confirmation of that theoretical prediction, and it shows that TGFs are piercing the atmosphere from top to bottom with high-energy radiation," said David Smith, co-author of the study and a physics professor at the University of California, Santa Cruz.

"This event could have been detected from space, like almost all the other reported TGFs, as an upward beam caused by an avalanche of electrons. We saw it from below because of a beam of antimatter (positrons) sent in the opposite direction."

The positrons don't last too long, however. As they bounce around, they lose energy by ionizing and exciting air molecules around them. Once their speed grinds to halt, they will annihilate with an electron in Earth's atmosphere to produce another burst of gamma rays that are less energetic than TGFs, he told The Register.

The results have been published in the Journal of Geophysical Research: Atmospheres. Although pair production is well known in particle physics, it has taken scientists a long time to detect antimatter from storms since it requires perfect timing to measure the phenomenon.

"It's an extraordinary event, and we still don't understand how it gets so bright. We detected it at an altitude of 2.5 kilometers, and I estimated our detectors could have seen it down to 1.5 kilometers. That's the altitude of Denver, so there are a lot of places where you could in theory see them if you had an instrument in the right place at the right time during a thunderstorm," Smith said.

It can be a pretty dangerous job too. It’s unwise to get too close to a TGF, but the radiation dose become negligible about a kilometer away from the source, Smith explained. “It's hypothetically a risk, but the odds are quite small," he said. "I don't ask pilots to fly into thunderstorms, but if they're going anyway I'll put an instrument on board." ®

We know what you're thinking: Where the hell is all the antimatter?

Charming change a small step to explaining why matter exists

Particle that behaves like matter and antimatter found: Majorana fermion

Fixing the unfixable – AMS-02 gets a new pump

Antimatter hangs around at CERN

An anomaly in the south Atlantic, apparently