The harbingers of Doomwatch: Quist is quite the quasi-Quatermass

Bug behaviour in the wild

Stob "Plastic-eating bugs [...] could help solve the global plastic pollution crisis," was the Guardian's rather chirpy take on this story, triggering the recollection of a childhood nightmare. I inhaled my mouthful of coffee. The office youngsters couldn't understand my panic. "It's the Doomwatch scenario!", I coughed. "The skies will soon be falling!"

Doomwatch was an early-1970s BBC TV sci-fi series that differentiated itself by dramatising plausible scenarios. In accordance with the Beeb's Cumaean Sibyl-like standard practice, great chunks of it have been wiped, but what does remain can be had as a box set from Amazon in an actual, you know, physical box. I borrowed it from a friend and sharpened the wooden needle on my DVD player.

The Plastic Eaters is indeed the very first episode. We find ourselves aboard a passenger jet that in rapid succession suffers various electrical faults, has its joystick go horrible and squidgy in the hands of the pilot, and descends to earth into a vast and ghastly explosion of stock footage. Crash in (sic) the title sequence:

The graphics are half knock-off Outer Limits, half rather naff intercutting of the DW logo and the atomic mushroom cloud, but the scary theme music is terrific.

But I soon stopped gibbering, because we next meet Toby Wren (Robert Powell, apparently aged 14 and with a face "like a haunted parking meter". This spot-on description is quoted by Powell himself in the disc 3 documentary The Cult of Doomwatch, a rich source of reviewers' factoids). He is applying for a job at the "Department for the Observation and Measurement of Scientific Work".

There are 10 types of people in the world, but there is only one Melvyn

With practically his first breath, Ridge boasts, trumpishly, of pinching Miss T Maker's bum, which has the dual effect of a) emphasising the programme's age even more than an earlier "Please extinguish your cigarettes during the aeroplane's final melt-down" announcement and b) causing my friend, who was helping me watch, to observe that he, Ridge, was rather a Gareth Hunt. Possibly she, the friend, was reminded of Mike Gambit in The New Avengers. Or possibly not. 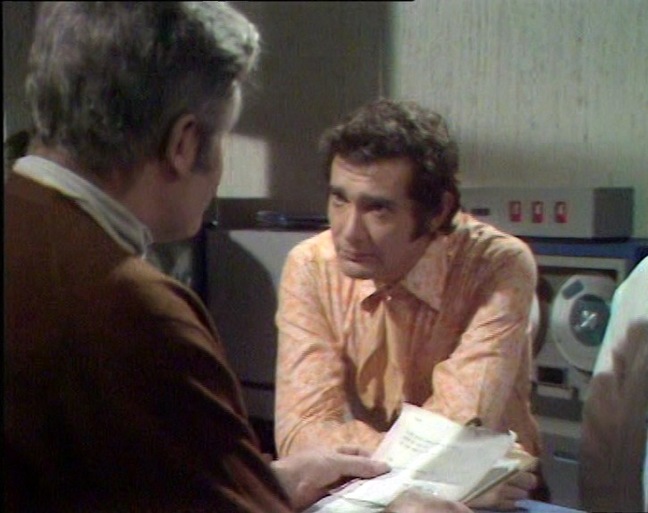 Here's a scoop. According to the creepy Ridge, it is not the department but their computer that is nicknamed "Doomwatch". "Quite a gadget. It's an analogue/digital hybrid, you know."

Just so. It has two cupboard-sized reel-to-reel tape drives, a PBX-style plug board, and multiple panels of blinking lights, variable pots and oscilloscopes. And, mirabile dictu, an actual CRT terminal display. Cor!

Anyway, the Doomwatchers quickly discover that a government laboratory has created a plastic-munching virus to try to address, yes yes, the problem of plastic waste. Quist - who is quite the quasi-Quatermass of the quango, uses the computer to simulate the bug's behaviour in the wild, and quickly discovers it will spread at an exponential rate. Top notch deduction, especially given he is running a hospital admin program: 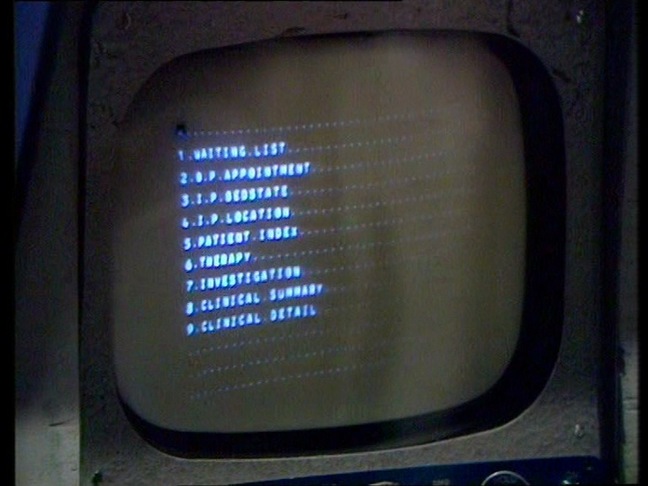 Meanwhile Toby Wren, for all his "first class honours Cambridge" degree, comes across as a bit thick. Flying home from the pre-credits crash site, he foolishly takes infected debris out of his briefcase. Cue the episode's main tension-ratchetting sequence, with many horrible, squidgy meltings. A notably disgusting effect: a steward-call button slithers slimily out of its panel to hang over the appalled passenger like a desocketed eyeball.

Of course, it all turns out all right, or at least all right-ish, with the Minister agreeing to postpone field trials of the virus, at least until after the local elections. This naughty Minister, by the way, is superbly played by John "CJ" Barron, who (all together now) did not get where he is today without knowing when to postpone field trials of deadly viruses. Everybody who sees this episode must make that joke. It is compulsory not optional.

The whole thing has a very Doctor-Who-for-grown-ups feel to it. Unsurprisingly so, with so many Whominaries of the era involved before and behind the cameras, for example: once and future stars Patrick Troughton and Elizabeth Sladen, cyber-daddies Kit Pedler and Gerry Davis, ace writer Robert Holmes. John Paul's performance as Quist brings to mind Jon Pertwee - for the bouffant hairstyle, the slick trimphone handling and a certain assumed moral authority - and also William Hartnell - for the numerous line fluffs. The special effects vary from clever application of a limited budget (oil-based paint does indeed look just like dissolving plastic) to risibly hopeless (a later episode features an attack of killer rubber rats sewn to trouser legs).

The treatment of female characters, whose function seems to be either purely decorative or tripping up and giving away the game, is perhaps even worse than contemporary Who. Women may not have been permitted to park the Tardis by themselves, but at least they didn't get groped.

Doomwatch ran for three years, during which time it called in plenty more good predictions: for example warning against putting everyone's private details on central computers (perhaps the hospital admin program gave them this idea), and correctly anticipating protracted government wriggling before making petrol lead-free. However, by the end of its run, disputes and burn-out in the writing team had taken their toll. The last ever episode of the series was completed but, because of BBC doubts, never broadcast. However it is included in the DVD set.

Sex and Violence sounds like a working title that they forgot to fix, but this is misleading. In the pre-credits sequence, a Mary Whitehouse-alike - ably portrayed by June .cotton Brown - is seen rousing a W.I.-ish rabble. "I'm not having my son taught in school about penises and vaginas by long-haired perverts!" Long hair features prominently in all her rants throughout the episode.

The Minister - still John Barron, despite causing that plane crash back in Episode 1; they really knew something about strong-and-stable government in those days - reacts by ordering the Doomwatchers to take part in a government commission enquiring into the permissive society. This they do at length, attending a matinee performance of the ground-breaking sexical Do It at the Princess Theatre (to which we viewers are not invited), and being shown genuine news footage of a Nigerian firing squad (to which, to my great regret, we are).

"What's Doomwatch doing in this mess?" asks Quist, but by then it's 40 minutes in, and too late to do a proper sci-fi episode about growing transplant organs in pigs, or persuading a gullible public to purchase and install eavesdropping computers in their living rooms.

I intimated something of my dissatisfaction to Dave, but he was unimpressed.

"Of course they could have done a sci-fi story," he said. "It's just a John Wyndham plot."

I made the noise written as "Huh?"

For those not yet familiar with our brilliant columnist, Verity Stob is the pseudonym of a software developer based in London. Since 1988, she has written her "Verity Stob" column for .EXE magazine, Dr. Dobb's Journal and, since 2002, The Register.