Anyone who uses the Facebook phone app knows what a toll it can take both on your mobile data and free time to be plugged into the social network through your device.

But what happens if you don't even have an account, you can't remove the app, and the social network won't leave you alone?

That's a problem facing folks around the world. One Register reader told us this week the Facebook apps on his Sprint LG handset are transmitting mysterious information in the background back to Facebook's servers, even though he doesn't have an account with the social network, isn't therefore logged in, and has repeatedly tried to turn off background data.

And the software cannot be removed without, presumably, unlocking or rooting the device.

"Since these are system apps, they can't be uninstalled. I can't even disable many of them," our reader, who wished to remain anonymous, said.

"When I uninstall updates on these apps and disable their access to use data in the background, within minutes they have all somehow turned their ability to use background data back on and have reinstalled all the updates that I manually uninstalled."

Facebook does offer instructions on how to disable updates for Android phones, though our tipster noted that, on his handset, that option is grayed out. 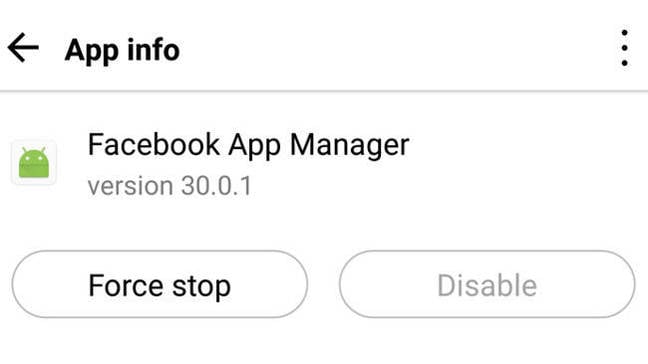 "But the behavior of these apps and the way they insist on using background data tells me that they are almost certainly collecting my data anyway."

It's hard to fault our reader for feeling this way. Who knows what the software is collecting and sending back to base? It isn't particularly clear.

The social network has not exactly covered itself in glory as of late when it comes to data privacy. Following the revelations of data harvesting by Cambridge Analytica that encompassed tens of millions of peoples' profiles, Facebook said it has had to suspend around 200 other apps that were possibly violating user privacy.

More recently, Facebook's mobile app alarmed Android users when without warning it began asking for root-level access on their devices. The Silicon Valley giant said this was the result of a programming blunder by its engineers, and that it had no real desire to get superuser clearance.

Why, then is the Facebook app trying to send and receive data on the handsets of people who don't even use the service? Facebook insisted to The Register that no personal info is being trafficked, only things like the operating system version and device type that Facebook uses to keep the app updated.

Even if you want to give the website the benefit of the doubt, that it isn't covertly spying on you and is merely vacuuming up details of your device, it's jolly rude this mild snooping can't be completely disabled. As always, US tech corp thinks it knows best.

In short: Facebook's app is going to get and stay updated whether you like it or not. We're all for regular security updates, of course, but not being able to fully disable or remove software from a device, particularly when you have no user account with the software, is a pain. A Facebook spokesperson told us the following:

We have partnered with mobile operators and device manufacturers to pre-install Facebook apps on Android devices to help people have the best experience on Facebook right out of the box and during the life of the device. By having Facebook apps pre-installed, we ensure people have the latest version of the application installed on their device, giving them access to bug fixes, critical security enhancements, and other new product features.