World+Dog can contact any student via a shared doc

Updated Google and the Victorian Department of Education have set parents, students, teachers, and the Office of the Australian Information Commissioner a poser: at what point does a feature become a vulnerability? Or just too creepy to put in front of kids?

Victoria's teachers and students have adopted a system based on Google Apps for Education, accessed through a portal on the department's EduSTAR system.

As people become more familiar with the setup, however, parents have identified system behaviours which are reasonable for business tools used by adults, but look out-of-place in the hands of primary school students.

The two brought to Vulture South's attention by a concerned parent appear to be normal Google Apps features, but we can understand how they could be worrying to a parent: easy access to around 170,000 EduSTAR profiles of teachers and students via Google Contacts; and the ability for anybody with a Google account – for example, Google Drive – to contact a student as an “outsider” with no connection whatsoever to education.

These are features – but, as one parent told The Register, in the sensitive setting of school education, they're prone to abuse.

In short: first, someone willing to abuse a legitimate EduSTAR login could easily scrape all the profiles; and second, those profiles would let a malicious outsider identify students and abuse other Google features to (as an example) chat with and groom students via shared editing of a Google document.

The concerned parent who contacted The Register arrive at their estimate of 170,000 profiles simply enough: they multiplied the number of pages (nearly 700) in EduSTAR's Google Contacts database with the number of entries per page. 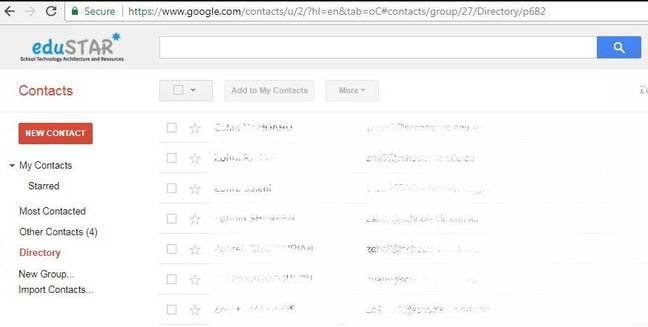 The URL tells all: navigation to the last page of contacts in EduSTAR. Image supplied. Click to embiggen

E-mail, the parent told us, is disabled for primary children.

Whoever is responsible for the implementation, The Register feels it's arguable that a system-wide open directory is a de facto bad idea and probably privacy breach: nobody should be able to see what school your kids attend.

We asked the Office of the Australian Information Commissioner (OAIC) for an opinion on this, and were told the office is investigating.

The second, more serious issue the parent pointed out to Vulture South is that any of these profiles can be contacted by other people with Google accounts – contact to or from EduSTAR accounts is not limited to people with EduSTAR logins.

The parent provided us with the following image as an example – an exchange created in a Google Drive shared image between parent (without an EduSTAR account) and their child (with an EduSTAR account). The back-and-forth is possible thanks to EduSTAR and Google's collaborative features. 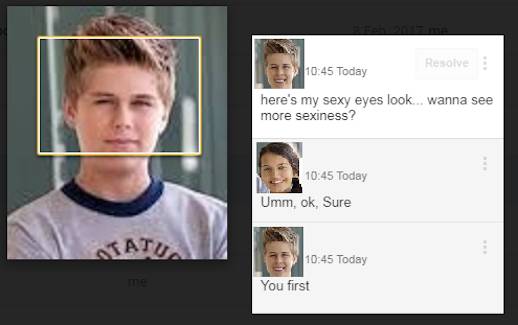 The parent created this chat with their child in Google Drive. Image supplied

The parent worried that such chats offer opportunities for grooming by outsiders – most easily if someone had scraped and then shared the Google Contacts profiles, since that would let the malicious try to target their approaches.

Nor does it seem that such a contact would be flagged to system administrators or parents.

It's also feasible that an outsider who knows how identities are created could try to brute-force their way into getting a student to respond. And not much force would be required because EduSTAR IDs are formulaic.

We included this aspect of the system in our inquiries to the OAIC.

As the parent pointed out, other attack vectors also exist.

It's easy to imagine account IDs becoming part of a phishing campaign, for example: getting students or teachers to open an “official-looking” document that happens to include malicious links.

Even if a malicious outsider had not accessed EduSTAR, an unrelated privacy breach could yield student identities – the education application Mathletics was in 2016 criticised for weak client-side security, and later, because its competition leaderboard seemed to contain enough information to identify individual students (first name, surname initial, and school).

“Two semi-innocuous breaches with personally identifiable information are then combined to create a much greater pedophile risk, where the would-be offender now knows where the child is at school, has a photo, a name, and now can instant message them (via Google Drive)”, the parent told us.

Vulture South considered whether or not to publish this story, because after all, accessing Google Contacts or sharing in Drive or Docs are features of G Suite.

Our contact argued that these features might be suitable for adults who log in to G Suite either because their employer uses it or because they want the features for themselves.

But kids can't consent in the same way as adults, so surely an application suite intended for school students must be built to the particular requirements of its intended audience. Students also need and deserve more than generic click-to-accept privacy and safety.

The Register raised the parent's concerns with Victoria's Department of Education. We do not yet have a definitive response from the Department.

The Victorian Department of Education has provided the following responses through a spokesperson:

“The Department runs Privacy Impact Assessments on key systems that house any student information and has performed an assessment on this system.

“Google Apps is a collaboration tool which necessitates students being able to find and connect with other students – either at their own school or at another school. As such, the directory function is a known and controlled function of Google Apps.

“Parents are provided privacy information about Google Apps which explain the tool, what information it collects (and why), and are offered an opt-out process.

“Students are supervised when they use the system, and are also educated around digital citizenship and encouraged to raise any concerns.

“The Department runs Privacy Impact Assessments on key systems that house any student information and has performed an assessment on this system.”

In a follow-up email, the Department outlined the following concerns:

The Register’s response: We accept the correction, that what’s exposed is not an “EduSTAR profile”, but a Google Apps for Education profile, and have amended the copy.

Department: “The address book is not exposed to external people and does not contain a student’s location/school. Moreover, students are unable to add additional information to their address book profile which is locked down so that it provides only the essential information required to operate the system.”

The Register’s response: We did not claim that the address book was exposed to external people. However, it could leak to the outside via a malicious insider, as described in the article.

Department: The article implies this is the same Google Apps that is used in business. It is not – it is Google Apps for Education – built specifically for K-12.

The Register's response: Our concern was, and is, that Google Apps for Education inherits too many default features from Google Apps.

Department: Additionally, the Department’s Privacy Impact Assessment reviewed the privacy and data security controls implemented by Google as a pre-requisite to providing system-access. Google comply with, and are independently audited on, the relevant industry standard controls such as ISO270001, 27017, 27018, SOC2/3.

The Register's response: We accept that this took place. If breach opportunities exist, it may also indicate that standards compliance does not cover all use-cases.

* What's “title and company” doing in a contacts database for teachers and students? Could it be that either the Department of Education, Google, or both, have rolled out Google Apps into schools with unmodified defaults?