Troubled Tintri admitted it may run out of cash within the next six weeks and go broke – and its shareholders are bailing out fast.

Tom Barton became the storage array hardware and software maker's chief exec in March, replacing Ken Klein, who was at the wheel when the Silicon Valley upstart's problematic debut on the stock market took place with a lower-than-expected valuation. That initial public offering was followed by disappointed sales staff leaving and consequent falls in revenue.

Tom Ellery, senior veep of worldwide sales, quit in March, pretty much along with Klein, and joined Puppet. He was replaced by internally promoted Tom Cashman, who assumed the role of executive veep of global sales and alliances.

Tintri, based in Mountain View, California, has had no full-time chief financial officer since Ian Halifax left in April this year. Tom Baron then became interim chief beancounter as well as the CEO.

The vendor's share price has plummeted from $6.55 in early March to $0.97 today – an 85 per cent fall in little more than 10 weeks, prompted by lousy financial figures that forced the CEO change and subsequent staff restructuring. 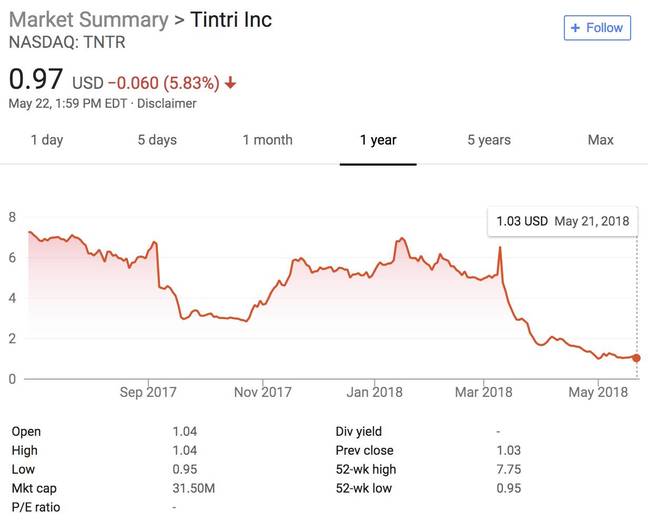 Now Tintri stakeholders are awaiting its first quarter numbers for fiscal 2019, due anytime now as the quarter ended on April 30. Three months ago, the biz estimated its sales would be between $20m and $21m, with a lower net loss than Q4's $37.4m. In its fiscal 2018 annual report, dated April 2, it stated:

And, crucially: "We likely do not have sufficient liquidity to continue our operations beyond June 30, 2018. If we cannot raise additional financing we will need to reduce or curtail our operations and may need to wind down the company, potentially through bankruptcy."

Accountants KPMG added a note to the annual report which reiterated this, adding: "These factors raise substantial doubt about the company’s ability to continue as a going concern."

That's not going to help the share price. Sadly, Tintri could be toast unless it receives some form of additional financing. ®