The source code to the Eudora email client is being released by the Computer History Museum, after five years of discussion with the IP owner, Qualcomm.

The Mac software was well loved by early internet adopters and power users, with versions appearing for Palm, Newton and Windows. At one time, the brand was so synonymous with email that Lycos used Eudora to brand its own webmail service. As the Mountain View, California museum has noted, "It’s hard to overstate Eudora’s popularity in the mid-1990s."

Whatever happened to the email app?

But it fell into neglect after Qualcomm stopped selling it in 2006, and a follow-up version was poorly received in 2007. Under this latest deal, Qualcomm is to donate all IP – copyright code, trademarks and domain names – over to the museum. The code is released under a BSD licence with an agreement to bundle the binary of RogueWave's 20-year-old MFC library (for non-commercial use).

Eudora was first released in 1988 for the Apple Mac by Steve Dorner, an IT staffer at University of Illinois at Urbana-Champaign, the college which also gave birth to Netscape. Qualcomm acquired it in 1991. Dorner remained in Illinois. A dot.com era profile of the author found Dorner not regretting getting rich at all.

Eudora was never truly open source, although Qualcomm later helped fund Dorner and a few others to re-implement the features as a plug-in for Thunderbird, a fully open source email client. This was the misleadingly titled "Eudora Open Source Edition".

The mid-'90s were awash with free email clients - one came with the Mozilla Netscape browser "suite", for example - and many ISPs would bundle with trailblazer's dial-up accounts. Eudora appealed because of its speed and huge range of power user features – nicely described here. So much so, that people actually paid for it. 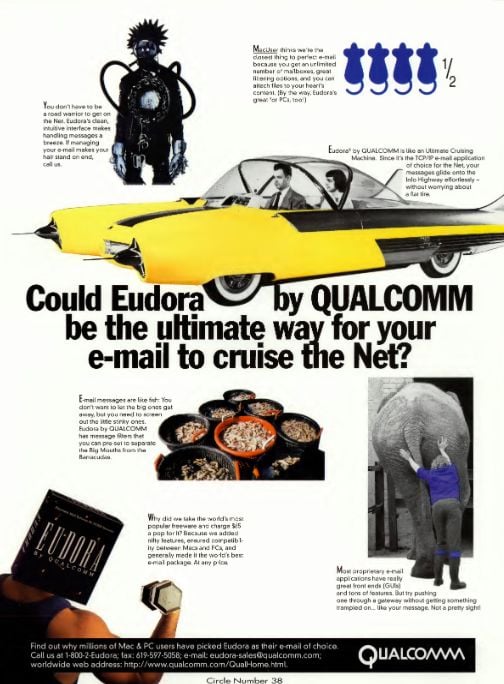 With Microsoft's desktop monopoly accounting for business users, and webmail for the mass-market, the market for powerful email clients by the 21st century had become a small one. Mozilla was never comfortable developing the open source Thunderbird alongside Firefox, and began to downplay it in 2012. The lack of clients was something readers regretted, El Reg found in 2010, after a survey of the sorry state of email clients at the time.

The release has continued the effort to unchain historically important source code: APL MacPaint and early source for MS-DOS have also been included.

The museum has noted the C source code for the Mac client consists of 69.9MB of code in 1,433 files, while the C++ source for the Windows version consists of 8,651 files weighing in at 458MB.

You can see for yourself here. ®