Astroboffins, get in here and explain Saturn's odd-shaped balls

A trio of physicists reckoned they’ve figured out why some of Saturn’s moons are so oddly shaped, with some looking like giant floating ravioli and others imitating stubby baguettes.

Saturn is most well known for its complex ring system and it is estimated that at least 62 moons are hiding amongst the structure so far. NASA’s Cassini spacecraft revealed images of some of its inner moons and found that Pan and Atlas, measuring tens of kilometers across, had bulbous middles and flat circular edges, making them look like flying saucers, whereas Prometheus is larger and looks more like an elongated hexagon. 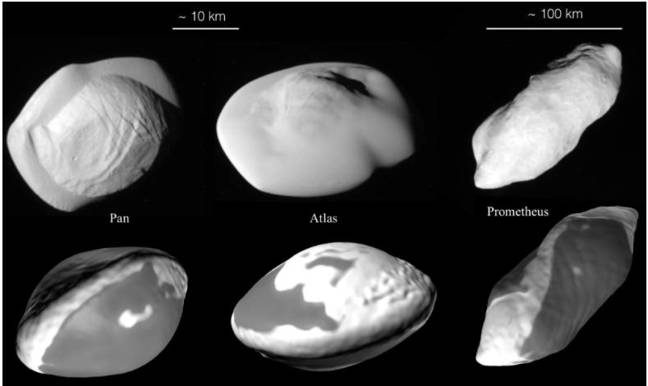 Martin Rubin, co-author of the study and a computational physicist at the University of Bern, said he was baffled when he saw the pictures. He decided to investigate with some of his colleagues by building a computer model to simulate the conditions under which the moons formed.

“But then, we took the tidal forces into consideration and the problems piled up,” said Adrien Leleu, first author of the paper and a researcher at the University of Bern. Saturn is a gas giant and has about 95 times more mass than Earth. It’s inner moons are very close, orbiting at a distance less than half that between the Earth and the Moon, so the ripping tidal forces are more intense.

“The conditions close to Saturn are very special,” said Martin Jutzi, co-author of the paper and also a researcher at the University of Bern. It means that its inner moons cannot have formed naturally with material piling onto a single core to be in the same form they are now. Instead, they must have been beaten into shape by repeated collisions and mergers with other similar sized moonlets.

Results published in Nature Astronomy show that a significant fraction of merging collisions happened after a single impact, or after one or two hit and run events. Atlas and Pan were probably involved in head-on crashes to produce the equatorial ridges and flat edges. Prometheus was hit by moonlets at wider angles causing it to have long slanting boundaries.

It also has potential consequences for Saturn’s only spheroid-shaped moon, Iapetus. Since it’s much further from Saturn’s body, the tidal forces are negligible. But if it also experienced merger collisions then the rocks it must have been crashing into must have been on a similar orbital plane.

“In that case, Iapetus probably formed before gaining its significant inclination with respect to Saturn’s equatorial plane, or out of bodies that had another common dynamical origin,” the paper concluded. ®