Scientists have found that the jets of ice and dust wafting from comet 67P are down to the way sunlight beams hits its unique rubber ducky shaped surface.

In a paper published in Nature, a group of astronomers studied why the sublimation process was concentrated into jets instead of a homogenous cloud of material.

“When the Sun rises over a part of the comet, the surface along the terminator almost instantaneously becomes active," Xian Shi, first author of the study and a researcher from the Max Planck Institute for Solar System Research, said.

"The jets of gas and dust, which we then observe within the coma, are very reliable: they are found each morning in the same places and in a similar form.”

The researchers built realistic computer simulations based on more than 70,000 images of the comet gathered by the Rosetta’s OSIRIS camera system. They found that the jets were down to its weird shape. In the neck of the rubber-duck shaped comet, the first rays of sunlight reach the neck joining 67P's two lobes later.

So the ice that sublimes earlier is comes from parts that are more easily exposed to the Sun. The pits and other curved parts concentrate the gas and dust emissions like an optical lens.

“The complex shape of Rosetta’s comet makes many investigations difficult. But for this study it was a blessing”, Shi said. 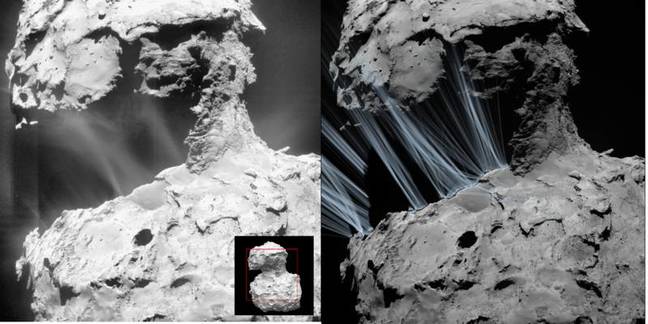 Comet 67P made headlines last year from the drama surrounding the European Space Agency’s lander Philae. Researchers failed to carry out the entire Rosetta mission, since the anchoring system aboard the robotic lander failed, causing it to bounce when it hit comet 67P.

It eventually plopped down in a spot that was too shady to glean any solar energy. After its primary batteries depleted, all communications were aborted. Luckily, the Rosetta probe survived and studied the comet in detail before it too was terminated, allowing scientists to make new discoveries about its coma, the envelope of gas and dust emerging from its surface like smoke.

Comets are hunks of icy space rocks floating around the edges of the Solar System. Gravitational interactions with larger bodies like Jupiter can occasionally nudge them out of their orbits and send them hurtling towards the Sun. The warmth causes the frozen gases and trapped dust particles on the comets like comet 67P to sublime in bright jets. ®

Cloud infrastructure spend to crack $90B and overtake non-cloud in 2022: IDC