Unclip your pager and bag from your belt: We need to make room for a battery-powered 1TB HD

Only works with HTC's VR headsets and mobes, sadly

VR folk who feel they haven't got enough gear strapped to their bodies will be please to know Seagate has developed a strap-on portable drive and battery combo for HTC's Vive Focus virtual reality headset.

The VR Power Drive has 1TB of capacity and a 5,000mAh battery hooked up to the headset with an integrated MicroB cable and USB-C adapter. It comes with a clip to fasten it to the user's waist belt.

There is a 1TB hard disk drive inside the device. We find this unexpected as the device's battery has to power this disk drive as well as the attached Vive Focus headset. It seems to us that an SSD would draw much less power from the battery and so provide more charge for the headset's use.

The company already has a 1TB hybrid drive for Sony's PlayStation and a 2TB external hard drive for the Xbox.

The Focus's on-board battery provides up to three hours of active use, four hours for seated vehicle passengers. Active use means playing VR games or watching movies. The Seagate VR Power Drive could double this.

Oddly, the Focus has a MicroSD slot supporting up to 2TB of external memory for its Snapdragon 835 CPU. Seagate's 1TB addition looks a tad mean. A Seagate spokesperson said: "We will continuing investigating the market needs."

The Focus headset doesn't need to be driven by a smartphone, notebook or desktop computer, being untethered and self-contained. It costs $600 and is only on sale in China, with HTC saying it will be available elsewhere later this year. 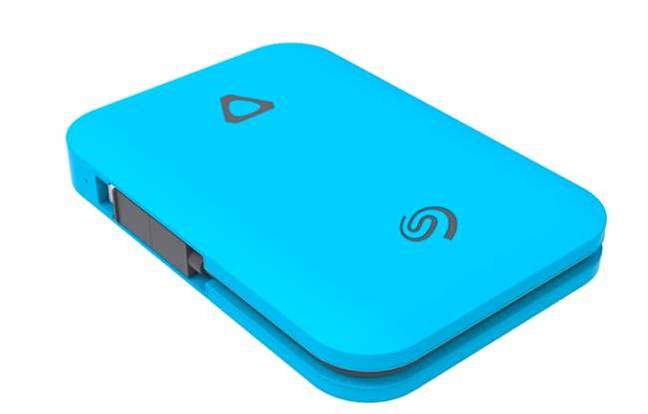 The VR Power Drive can be hooked up to an HTC U12+ mobile phone as well, granting extra storage and battery capacity.

HTC mobes can link to the Focus VR headset via Focus System Update 2.0 to let users take calls and messages and see social media notifications through the headset. Apps can be installed on the MicroSD card – presumably on the VR Power Drive as well, and are obtainable from a Viveport store using international credit cards.

Seagate and HTC set up a strategic alliance in January. The VR Power Drive will be available this year but the price remains a mystery. ®