Cloud is a six-horse race, and three of those have been lapped

New Gartner Supernatural Square has AWS and Azure on top, IBM and Alibaba lagging and Oracle on an offensive

Analyst firm Gartner’s 2018 Magic Quadrant for infrastructure as a Service (IaaS) has again found that Amazon Web Services and Microsoft Azure are the most mature clouds, but has omitted more than half of the vendors it covered last year on grounds that customers now demand more than just rented servers and storage.

Here’s where the remainder landed on the Paranormal Polygon. 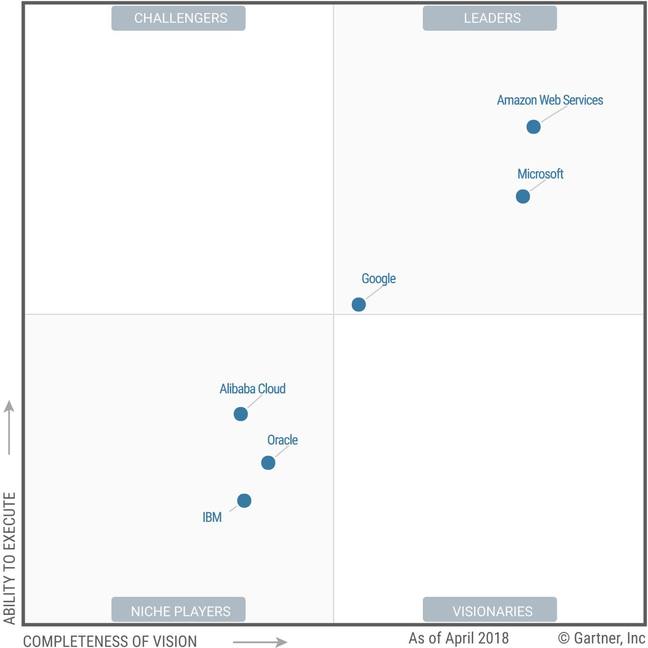 Gartner’s 2018 Magic Quadrant for infrastructure as a Service. Click to enlarge

Let’s start with the three firms identified as leaders on the Quizzical Quadrilateral.

The analyst firm says AWS is the most mature cloud and has come to be seen as a safe choice, but cautions: "Customers should be aware that while it's easy to get started, optimal use — especially keeping up with new service innovations and best practices, and managing costs — may challenge even highly agile, expert IT organizations, including AWS partners. As new, less-experienced MSPs are added to AWS's Audited MSP Partner program, this designation is becoming less of an assurance of MSP quality.”

“Technical support personnel may also lack adequate expertise,” the firm adds. “The FastTrack program, which provides onboarding support from Azure engineering, results in successful pilots. Customers should use an MSP to execute a more successful implementation, but Microsoft has just begun the process of certifying MSPs; expert, experienced MSPs will be identified in partner directories starting in 3Q18.”

The firm also rates Azure as “optimized to deliver ease of use to novices with simple projects” which is great but “comes at the cost of sometimes making complex configurations difficult and frustrating to implement.”

Overall, however, Azure is rated a fine choice and especially so for organisations already committed to Microsoft.

Are we there yet, Google?

Gartner rated Google a solid choice even if its services aren’t yet as broad as rivals. The firm said that Google’s Customer Reliability Engineering program – which sees the company advise on how to run IT like Google’s own site reliability engineers – is a positive, but is only offered to a few customers or through Rackspace and Pivotal.

On the downside, Gartner found that Google’s positioned itself as the most cost-effective cloud, but “its deepest negotiated discounts are usually limited to a single-year contract.”

Would-be Google cloud users are also warned that some current customers “sometimes cite ISV licensing and support challenges”, among them the fact that “Oracle will not normally license or support its software on Google Compute Engine”.