It's a Mod 'un world 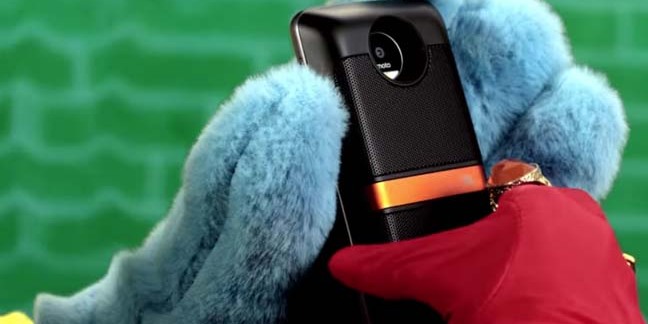 Lenovo's Motorola may soon offer 5G through its Mod phone expansion system, which allows peripherals to clip to the back of Mod-compatible phones using a magnet, according to leaked imagery.

The images, published at XDA developers, include a bulky 5G Mod. The Moto Mod bus supports USB 3.1 speeds: sufficient for the gigabit data transfers of 5G.

As with every new generation of radio interface, 5G requires additional power over the previous generation, so it’s reasonable to assume that the Mod includes its own battery (as several other Mods do).

Motorola hinted at the possibility of a 5G Mod 18 months ago, when senior executive John Touvannas suggested: "Without having to wait for the next-gen phone that can bring the next technology or capability, we can get to that quicker through the mod."

Huawei has already promised a 5G handset for 2019, while Lenovo has promised to be one of the vendors in the first wave.

Lenovo's founder recently defended the company's decision (along with other Chinese manufacturers) to vote for the American firm Qualcomm's 5G data-encoding standard over that of China's Huawei in a 2016 vote. The move had faced public backlash in China for being "unpatriotic". Lenovo deputy president Huang Ying explained that the the encoding spec Lenovo backed was widely supported, while only Huawei had voted for Huawei's option.

China developed the TD-SCDMA 3G spec and then TD-LTE to avoid paying royalties to Qualcomm and Ericsson (among others). But for 5G, China has its put its homegrown technology into the international standards fight.

Moto is expected to show the Mod at a launch of the Z3 Play in Brazil next week, a large and dynamic economy where Moto sells buckets. In 2017 Motorola grew 56 per cent in Latin America thanks to its C series phones.