RIP to two 'naut legends: A moonwalker and a spacewalker 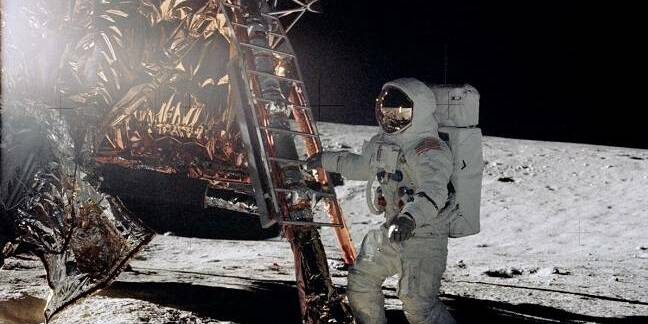 Obit The world lost two astronauts this past weekend – one a moonwalker that you've likely heard of, the other a pioneering spacewalker you might not know about.

Alan Bean, the fourth man on the Moon, passed away on 26 May, aged 86. He is perhaps most famous for being the lunar module pilot (LMP) on the Apollo 12 lunar landing mission.

Bean was not the first choice. Clifton Curtis Williams, who along with Bean was on the back-up crew for Gemini 10, was originally rostered for the flight.

However, following Williams' death in a T-38 jet trainer accident, Bean was moved to the Apollo 12 prime crew from the Apollo Applications Program (which would later spawn the Skylab space station).

The Apollo 12 launch was famously eventful. The Saturn V rocket was struck by lightning, knocking out telemetry 36 seconds after lift-off.

Using a combination of NASA engineer John Aaron's quick thinking and Bean's detailed knowledge of the command module, the Signal Conditioning Electronics (SCE) system was flipped to its auxiliary setting, restoring the flow of data. Ground engineers fretted about the effect of the lightning on the command module's parachutes, but, in the absence of hard data, allowed the mission to proceed.

In contrast to the Apollo 11 mission, the second lunar landing was a more light-hearted affair. Bean attempted but failed to take a timed photo of himself and Commander Pete Conrad on the surface together. He also destroyed a television camera by accidentally pointing it at the Sun while on the surface.

Ultimately, the mission – which demonstrated near-pinpoint landing accuracy by setting down within walking distance of NASA's old Surveyor 3 probe – was a success, though Bean was almost knocked out by a loose piece of equipment in the capsule upon re-entry.

After Apollo 12, Bean went back to the Apollo Applications Program and flew the second crewed mission to the Skylab space station, following the repairs undertaken by the crew of his former commander, Pete Conrad.

Bean spent a record 59 days in space as part of the Skylab 3 mission before returning to Earth to serve as backup for Apollo's last hurrah – the Apollo-Soyuz Test Project of 1975.

Opting to leave NASA and free up places for other astronauts in the Space Shuttle program, Bean's career took an unusual turn. He became a prolific painter, trying to capture a sense of "what it was like" while also creating pieces both celebratory and rueful, such as one featuring all three members of the Apollo 12 crew on the Moon entitled "The Fantasy". His crew mate, Dick Gordon, was later slated for Apollo 18 but never flew in space again.

Bean added texture to his paintings through the use of lunar boot prints and fragments of his mission patches, contaminated with lunar dust. He could also be found on the lecture circuit, giving candid insights into his time at NASA. One such talk, recorded by Leo Bakker at a Space Lectures event, is below and well worth a listen.

Alan Bean speaking in Pontefract for Space Lectures in 2013

Bean's passing leaves only four humans alive who have set foot on the Moon.

Passing away the day after Bean, Peterson, 84, waited a long time for his first spaceflight, having joined NASA in 1969 following the cancellation of the US Air Force Manned Orbiting Laboratory program.

Peterson served as part of the Apollo 16 support crew before moving on to the Space Shuttle program and finally flying on the first launch of Challenger, STS-6.

The mission also sent NASA's first Tracking Data and Relay Satellite into space. Unfortunately, a problem with the Inertial Upper Stage attach to the satellite left it stranded in the wrong orbit until engineers worked out a way of using the spacecraft's thrusters to manoeuvre it to the desired geosynchronous location, where it remained before being finally decommissioned in 2010 and shifted to a graveyard orbit.

Peterson himself undertook the first scheduled spacewalk from a Space Shuttle following an aborted attempt on the previous mission due to a combination of crew illness and faulty spacesuits. For STS-6, Peterson and fellow Mission Specialist Story Musgrave spent four hours and 17 minutes in the shuttle's payload bay, testing tools and techniques for use on later missions.

After waiting nearly 15 years for his first mission, Peterson retired from NASA and followed the well-trodden path into aerospace consultancy. ®