Your F-35s need spare bits? Computer says we'll have you sorted in... a couple of years 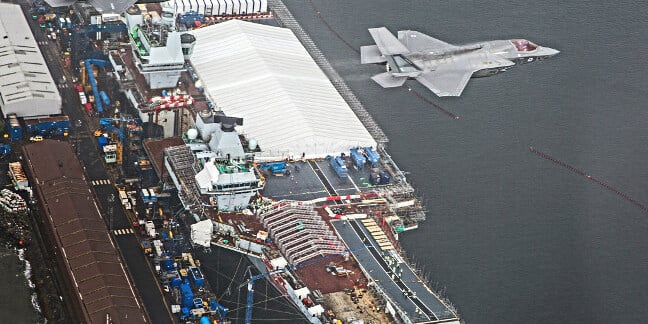 F-35Bs fly over HMS Queen Elizabeth in 2016. The British aircraft carrier (pictured in build) will deploy Britain's jets around the world

Delayed upgrades to F-35 fighter jets along with bespoke logistics software that displays spare part lead times in years are keeping some aircraft grounded, according to a report from the US air force station where the core of Britain's future F-35 operators are being trained.

Lockheed Martin's Autonomous Logistics Information Software (ALIS), an integral part of the F-35 "system" that monitors aircraft health and orders new spare parts as and when required, is allegedly giving part lead times of up to "a couple years out", according to one Sgt "Pedro", quoted by American website Defense News*.

Although he "quickly added" that this was a "forecasting", the maintenance controller revealed he had to make phone calls to track down the wanted part – rather negating the point of an all-in-one maintenance software suite that is meant to automate that function.

While Defence News reported that "the system can reprioritize parts, so sometimes maintainers can actually receive a part as quickly as three to five days even if a longer date is projected", Pedro then went on to say that jets are still cannibalised for urgently needed spares – not an uncommon practice in any large organisation with lots of complex equipment with a high required availability rate, but still showing that end users need to work around the USP of a software-based just-in-time logistics system.

The American base where all this goes on, US Marine Corps Air Station Beaufort in South Carolina, is home to the joint US-UK F-35B training squadron, known as VMFAT-501. The squadron has 30 jets on charge: 19 American and 11 British. As previously reported, Britain's full fleet of 15 (some are based elsewhere in the US) F-35Bs is costing us around £345m – an average across the fleet of £23m per aircraft - to upgrade their onboard software to the latest version, Block 4. The current price for British F-35Bs is somewhere around £85m, if statements made by Lockheed to El Reg earlier this year still hold true.

The UK has signed contracts to buy 48 F-35Bs so far, The Register understands, and made public commitments to acquire 138 jets in total. Some of these may be the F-35A model, which cannot fly from aircraft carriers as the B model will be required to do.

It is important to point out that spare part shortages are ultimately down to the number ordered by governments buying the F-35, the numbers made by Lockheed in response to those orders and the speed at which spares are delivered to government holding depots. ALIS returning delivery times measured in years is a symptom rather than a cause.

Nonetheless, American maintainers appear unhappy with the basic speed of use of ALIS. The ever-talkative Pedro told Defense News about an apparent bottleneck centred on the ratio of ALIS servers to jets at any particular location. Broadly, it appears from his comments that too many jets to servers results in the system at that location becoming noticeably slow.

As previously reported, ALIS and its customised Panasonic Toughbooks have been giving the US quite a few headaches over its prolonged dev cycle.

Britain's first owned-and-operated F-35Bs are due to arrive at RAF Marham in Norfolk next week, following a ferry flight across the Atlantic where the jets will be refuelled in flight by the RAF's converted A330 Voyager tankers. ®

The site said it agreed not to publish his surname over "security" concerns – presumably his own personal security in case angry senior officers want to "have a word" with him.

In other news, US aero-engine firm Pratt & Whitney has been handed a contract to build 135 of its F135 engines for the F-35 fleet.