Nadella tells worried GitHub devs: Judge us by our actions

Everything will remain open, along with lots of Microsoft 'opportunities'

Microsoft CEO Satya Nadella is at pains to reassure developers that its $7.5bn purchase of GitHub won't turn the code repository into an Azure-only space.

"We love developers, and we love open source developers," he said on a call formally announcing the deal on Monday morning before promising, repeatedly, that GitHub will remain open and independent.

That message was then reiterated by the person who will become GitHub's new CEO, if and when the deal goes through. "Any language, any operating system, any cloud, any device, all developers," promised Nat Friedman, an open source developer who joined Microsoft two years ago when his company, Xamarin, was acquired.

In fact, the desire to soothe fears took up most of the call, a situation that was most apparent when Nadella pleaded with software developers to "judge us by the actions we have taken in the recent past, our actions today and in the future." He reiterated, again, that Microsoft was "all in with open source."

And while Friedman was talking, slides showing Amazon Web Services and Google Cloud with equal status to Microsoft Azure were shown in the background. A second slide showing the GitHub Marketplace had Microsoft's Azure in the last of four slots.

So everything's going to be fine?

There is a direct correlation between vague marketing speak and the likelihood that a company is planning to do something you won't like.

The moment Nadella or Friedman stopped talking about how much they love open source, the very next thing was about how the deal was going to present "opportunities."

What are these opportunities? They are also wonderfully vaguely worded: "empower developers to achieve more"; "accelerate enterprise developers use of GitHub"; and "bring Microsoft's developers tools and services to new audiences."

No one spends billions of dollars – $7.5bn in this case – on something because they think it's great and they just want to protect it. Microsoft wants a hefty return on investment and it is counting on devs' inertia in shifting to a new platform to deliver it.

That slide showing Azure as just one out of four tools in the GitHub Marketplace? Azure was Photoshopped in. We checked, hitting refresh on the marketplace frontpage, Azure never appeared. What's the bet it appears every time once the deal goes through? 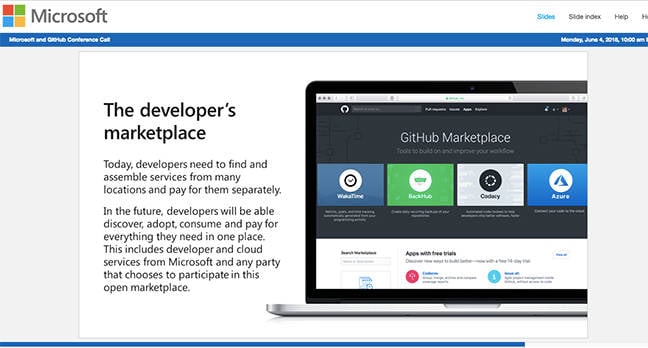 That fourth service on the right? That's Azure. It's been Photoshopped in.

On the call announcing the acquisition, Microsoft was already talking up its VS Code source code editor, claiming that it was "chosen by developers on Stack Overflow as the most popular dev environment", and that it was going to offer a "more seamless experience" between it and GitHub in future. Oh joy.

Nadella and Friedman stressed that GitHub will run independently and used Microsoft's acquisition of LinkedIn as a model for what that looks like.

That was back in 2016 and while Microsoft hasn't done what it did with Skype when it acquired it in 2011, it has harvested all the information that was on LinkedIn for its own purposes. LinkedIn hasn't been renamed "Microsoft Connections" but its "independence" only stretches so far – it is a feeder into Microsoft's business.

GitHub sits somewhere in between LinkedIn and Skype: it provides a service that people use professionally every day but it isn't a consumer product.

Microsoft completely rearchitectured Skype and tried to force everyone into paying it more money for existing services that are slowly being pulled behind a paywall. LinkedIn provides valuable data. And GitHub is a combination of the two – a source of data and an opportunity to make money by pushing Microsoft services.

We can expect to see GitHub gradually move onto Microsoft platforms and for Microsoft products and services to take up more and more space on GitHub.

Nadella stressed that Microsoft should be judged by the "recent past" for good reason: because just beyond the recent past is the less-recent past. A past when CEO Steve Ballmer called Linux a "cancer" and the company went to great lengths to force people into the Microsoft eco-system. (Ballmer now loves open source, sorta.)

This unpleasant past was summarized by Nadella as a "journey" that Microsoft had gone through with the open source community. Well that's one way of describing it. We'd note that Steve Spielberg's 1971 movie Duel was also a journey, with one man on a lovely cross-country journey… while another in a truck tries to run him off the road.

Nadella is very keen for people to imagine a new Microsoft that doesn't use its power to screw over everyone it meets, and after four years in charge he can put some claim to the touchy-feely Microsoft. But we'd argue that four years is also a short time when it comes to ingrained corporate culture.

If Microsoft grows more powerful and has to stop worrying so much about Google or Amazon as investigators and lawmakers dig into their businesses, we wouldn't be at all surprised to see a resurgence of the old Microsoft.

The fact is that Microsoft has a massive conflict of interest when it comes to GitHub. GitHub was set up with developers as the focus, and while Microsoft promises to continue that approach, it is also desperate to get people on to its cloud platform and using its services.

While Microsoft would be mad to cut off AWS and Google Cloud – sending hundreds of thousands of developers scurrying off to an alternative and undermining its own valuation of the company – it is very unlikely that GitHub won't end up prioritizing Microsoft products, either directly or indirectly.

If you are GitHub's lead guy for integrating with AWS, what's the bet your budget is going to get some extra scrutiny next year?

Finally, it's probably worth pointing out a Freudian slip from soon-to-be CEO Nat Friedman. His company was bought by Microsoft just two years ago and he went to some trouble to go through his open source credentials.

But whenever he talked about the future of GitHub, he used the word "we" repeatedly: not "we" the open source community, or "we" the GitHub and Microsoft teams, but "we" the people who are employed by Microsoft.

If you are building on Azure and you love VS Code, this proposed acquisition is great news for you. Otherwise, you may want to start building a transition plan to an alternative code repository.

No big rush: Microsoft doesn't expect to get regulatory permission until the end of the year. And it will only make incremental changes after that while no doubt persuading itself that each Microsoft-biased decision is not pushing GitHub away from its open approach. But change is coming, be sure of that.

Don't forget: Microsoft is also a massive user of GitHub – loads of its code is on the site – and thus it had its own interest in keeping the service alive. The business wasn't exactly flying in terms of finances...

GitHub lost $66 million in just 3 quarters of 2016. That's not sustainable. They only had $350 million in VC (total). Something had to give. Assuming $22mil/quarter, that's 4 years of total runway. They had to be absorbed by someone with other revenue.

Oh, did we mention that there was no question-and-answer session at the end of the call? Can't imagine why. ®