Dodgy outer orbits all down to asteroids and gravity 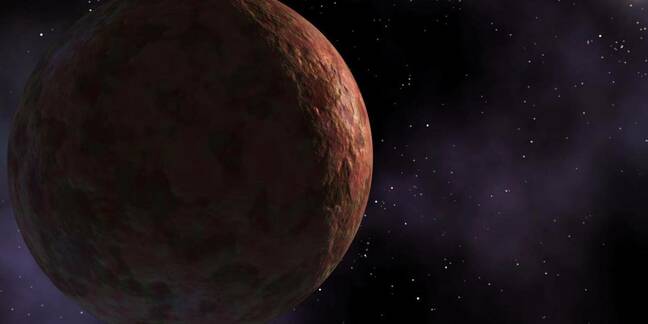 The mysterious, so-called Planet Nine, may not be a planet after all but just gravitational trickery, according to a new study.

A team of researchers have published a new theory explaining why objects on the edge of the Solar System like Sedna - classified as a large minor planet - have such weird, giant circular orbits. Sedna circles round the Sun at a distance of a whopping eight billion miles, making it one of the most distant objects in the Solar System, other than faraway comets.

In 2014, a pair of astrophysicists speculated that an undiscovered planet, dubbed Planet Nine, might exist beyond Neptune. It would account for the strange orbits of not only Sedna, but for other trans-Neptunian objects (TNOs) too.

Scientists believe Planet Nine may have began as the core of a gas giant, but some complex interaction with Jupiter knocked it all the way to the outer Solar System. It would also have to be about ten times more massive than Earth, have a diameter ranging from two to four times that of Earth, and an orbital period of 15,000 years to account for the effects on TNOs.

Planet Nine has not been confirmed, however, and all attempts to find it have been fruitless. A paper presented on Monday at the 232nd meeting of the American Astronomical Society in Denver, proposes a different idea.

Instead, there is no new, undiscovered planet. The strange orbits of TNOs are a result of what the researchers call “collective gravity”.

"There are so many of these bodies out there. What does their collective gravity do?" said Ann-Marie Madigan, co-author of the study and an assistant professor of astrophysical and planetary sciences at the University of Colorado Boulder (CU Boulder). "We can solve a lot of these problems by just taking into account that question."

Computer simulations show that the orbits of TNOs can be produced by taking into account the effect of asteroids. These smaller asteroids slam into the bigger TNOs like Sedna and nudge its otherwise elliptical orbits into a circular shape.

"You see a pileup of the orbits of smaller objects to one side of the sun," said Jacob Fleisig, lead author of the study and an undergraduate studying astrophysics at CU Boulder. “These orbits crash into the bigger body, and what happens is those interactions will change its orbit from an oval shape to a more circular shape."

The jostling of these asteroids and space junk might have led to other effects like regularly directing comets into the inner solar system - some of which could have headed toward Earth. Maybe one of them even crashed into it and killed the dinosaurs.

"While we're not able to say that this pattern killed the dinosaurs," Fleisig said, "it's tantalizing." ®

That's way, way, way older than the dust off your oldest PC