Google freezes Android P: Get your shoes on, tire-kicking devs

With Google freezing the Android P APIs yesterday, both major mobile platforms have shown their hand for 2018. The freeze comes as Google released "Beta 2", which is really the third Developer Preview release of Android P issued so far.

The API freeze means developers can now compile and submit apps compatible with Android P to the Google Play Store.

This is the first year in which Google has really invited a range of enthusiasts to come in and kick the tires. Previous Android previews only ran on Google devices, but this year a number of other devices - from Nokia, Sony, Xiaomi, OnePlus, Essential and Vivo - can also get a glimpse of code before it is baked into manufacturers' ROMs. These images will be pushed out shortly. 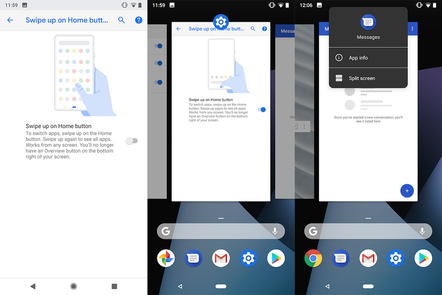 Here's our hands-on of the previous beta. And for the curious, here's the Android P feature list and the DP3 bug list. Google warns that battery life "may be regressed" in this release.

Apple released the first preview of iOS 12 this week at its WorldWide Developer Conference, and as predicted, focused on stability and performance rather than cramming the OS with new features. Apple claims apps on a four-year-old iPhone 6 Plus now launch 40 per cent faster. It allows parents to supervise and manage children's screen time. We covered some of the more interesting Apple developments here.

Google launched something similar to Apple's new phone nanny last year: Family Link, an app that allows parents to monitor app usage and block access remotely - and it came to the UK this year. Family Link runs on an iPhone, but unlike Apple's offering, it requires children under 13 to have a Google account. Get 'em young. ®