The two suppliers have both designed tech using Nvidia DGX-1 GPU servers and their own storage arrays to provide storage-server systems for "AI" applications such as deep learning.

Pure's deliverable hardware-software system is called AIRI (AI-Ready Infrastructure), while NetApp and Nvidia have deep learning reference architecture (DL RA). NetApp published Resnet-152 and Resnet-50 performance numbers and bar charts with 1, 2, 4 and 8 GPUs for its A700 all-flash array and one DGX-1, not the top line A800 array.

Pure published individually differently scaled bar charts with no numbers. We crudely compared the two charts yesterday and concluded NetApp was ahead – but this was wrong.

Pure contacted us and supplied the numbers for its Resnet runs, allowing a direct comparison. Resnet-152 first: 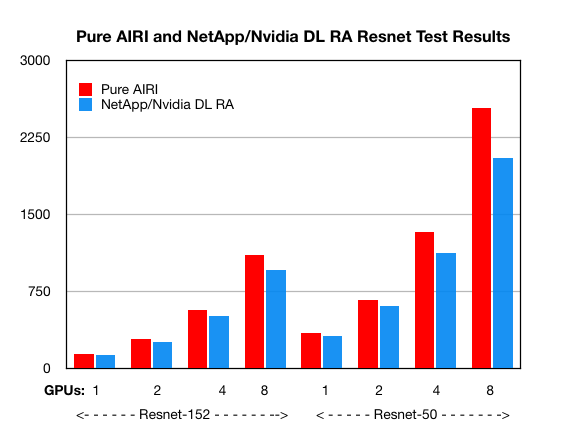 AI system choices are going to need more than two simple benchmark runs, and the Resnet benchmarks have been described by a Pure spokesperson as "incredibly complex".

But here we do see a direct comparison between Pure's FlashBlade and NetApp's A700 – and the FlashBlade is ahead. ®