It makes base Unified Compute Platform (UCP) servers, DS(nnn) models, and then optimises them for VMware environments with V(nnn) models. These V(nnn) models are then used in hyperconverged (HC) and rackscale (RS) product families: 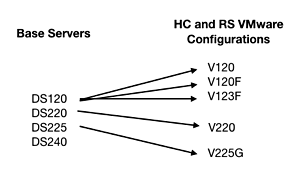 Tase are all single node systems in 1 or 2U enclosures. The "F" suffix means an all-flash server; the others are hybrid flash/disk designs. The "G" suffix means an Nvidia GPU-accelerated system. DS220 and DS240 servers are used in a converged infrastructure (CI) product set:

This is Hitachi V's second wave of Skylake servers. It announced its first Skylake RS and HC servers in August last year, with four V(nnn) models:

The V120F product name is used in the latest announcement.

The HC systems use vSan and the RS system support VMware Cloud Foundation. Hitachi's CI systems include the latest VSP storage, UCP Advisor and see the DS220 and DS240 servers.

Previously Hitachi V had a CB600 blade server line, with eight blades in a 6U chassis. There are no Skylake blade servers, or cartridge servers in this latest announcement.

They feature in a Hitachi config for SAP HANA and a data lake with a MongoDB Cluster running on the RS servers. There are reference architectures for Cloudera and MongoDB with pre-tested, pre-validate infrastructure for Cloudera Enterprise Data Hub and MongoDB Enterprise. There is Pentaho Data [analytics] integration as well.

These new UCP server, systems and applications offerings are available globally now or expected to be available in August.

Hitachi Vantara is having a hard time keeping up with other server suppliers according to IDC, and is growing its sales less than the market as a whole. With these new models, particularly the ones with Optane caching and Nvidia GPUs, it will be looking to claw back some lost ground. ®